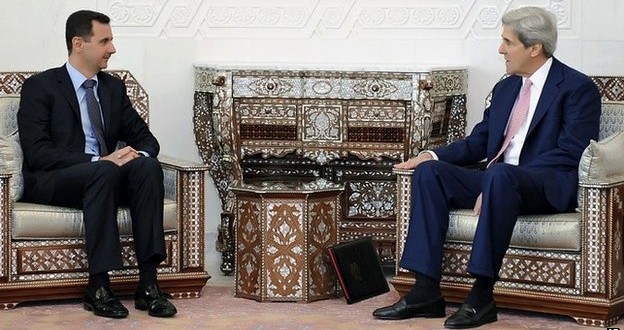 US Secretary of State John Kerry says he wants to “re-ignite” negotiations with President Bashar al-Assad to end the conflict in Syria.

Speaking as the war enters its fifth year, Mr Kerry said it was “one of the worst tragedies any of us have seen”.

He said the international community was upping pressure on Syria’s regime to hold new peace talks, saying “we have to negotiate in the end” with Mr Assad.

More than 215,000 people are estimated to have been killed in the conflict.

“We are working very hard with other interested parties to see if we can re-ignite a diplomatic outcome,” Mr Kerry said in an interview in the Egyptian resort of Sharm el-Sheikh.

He told CBS News the US was working with the moderate opposition in Syria as well as pursuing a diplomatic track with “a number of different critical players in this tragedy”.

“Everybody agrees there is no military solution; there’s only a political solution,” he said.

Mr Kerry: “There is no military solution. There is only a political solution”

The US has “always been willing to negotiate in the context of the Geneva I process,” he added, referring to a 2012 plan to end the conflict that included forming a transitional governing body and holding free and fair elections in Syria.

The White House has in the past insisted that Mr Assad stand down as part of a political settlement.

Some analysts suggested that Mr Kerry’s comments marked a shift in US policy, but State Department spokeswoman Marie Harf denied this.

She said Mr Kerry had merely repeated the “long-standing policy” that the US wanted negotiations with the regime at the table – but not direct talks with President Assad.

“Policy remains [the] same and is clear: there’s no future for Assad in Syria,” she tweeted.

Mr Kerry’s comments are the clearest indication yet that Washington is coming to terms with the reality that its Syria policy is going nowhere.

Frequent declarations that President Assad is “part of the problem and needs to go” are all very well, but there is simply no sign of him being toppled.

Indeed the rise of a new actor in Syria – the Islamic State organisation – leads many experts to believe that if Mr Assad were to be swept away, then the main beneficiary would be the jihadists of IS. Syria might descend into even greater chaos and bloodshed, if that is imaginable.

Mr Kerry’s reference to the Geneva I process of 2012 is instructive. This was seen by many as ruling out any future role for Mr Assad but equally – at the urging of his Russian allies – it did not explicitly call for him to leave Syrian politics. That was to be decided by the Syrian people.

Mr Kerry has been a leading player in international efforts to kick-start peace talks, bringing representatives from the Assad regime and the Syrian opposition together in Geneva for the first time early last year – but the negotiations collapsed after two rounds.

The four-year conflict has displaced close to half of Syria’s population, according to the UN

“To get the Assad regime to negotiate, we’re going to have to make it clear to him that there is a determination by everybody to seek that political outcome and change his calculation about negotiating,” Mr Kerry said.

“That’s under way right now. And I am convinced that, with the efforts of our allies and others, there will be increased pressure on Assad.”

The civil war in Syria began after President Assad’s forces launched a deadly crackdown on a peaceful uprising against four decades of his family’s rule.

The country has since been carved up by government forces, the Islamic State (IS) jihadist group, Kurdish fighters and the remaining rebel groups.

A US-led coalition has been conducting air strikes against IS fighters in Syria since last summer. It has also sent troops to neighbouring countries to train Syrian rebels.

On Friday, CIA Director John Brennan said the US had “legitimate concerns” about who might replace President Assad given the rise of IS.

“None of us, Russia, the United States, coalition, and regional states, wants to see a collapse of the government and political institutions in Damascus,” Mr Brennan said.

He warned that IS and other “extremist elements” were “ascendant right now” in some parts of Syria, adding: “The last thing we want to do is allow them to march into Damascus.”