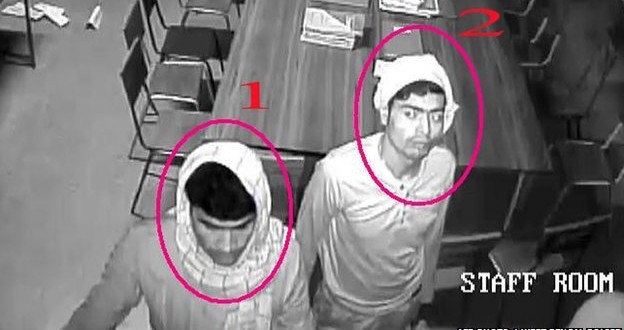 Eight men have been detained by police investigating the rape of an elderly nun in the Indian state of West Bengal.

Six alleged attackers were caught on CCTV as they burgled the convent before the 74-year-old nun was raped.

Prayers for the victim are are being said in churches across the country. She is in a stable condition in a Calcutta hospital.

The Archbishop of Calcutta has called for more security at the Convent of Jesus and Mary, the site of the attack.

Footage released by the police shows the convent being ransacked

AFP report that four of the six attackers have been identified through the video footage.

The attackers ransacked the convent school in Ranaghat early on Saturday morning and stole money before raping the nun in the convent itself.

The Chief Minister of West Bengal has promised swift and strong action against those involved. India’s federal police service, the CID, has taken over the investigation.

Christians in the capital, Delhi, have previously held protests at a failure to protect them

The Archbishop of Calcutta, Thomas d’Souza, gave the BBC his account of what happened.

“There are only three sisters in the community,” he said.

“One sister was molested badly. The other two, and a guard, were tied to chairs.”

Several churches in Delhi have been attacked in recent months.

The men also stole money from the school, he said, vandalised the chapel, broke open the tabernacle and took away the ciborium, the sacred vessel used during Mass.

The school is well-known and has been open for 19 years, he added.

Christian groups have recently held protests in the capital, Delhi, saying they are being targeted and demanding better protection.

Some highlight a series of recent attacks by vandals on churches in the city.