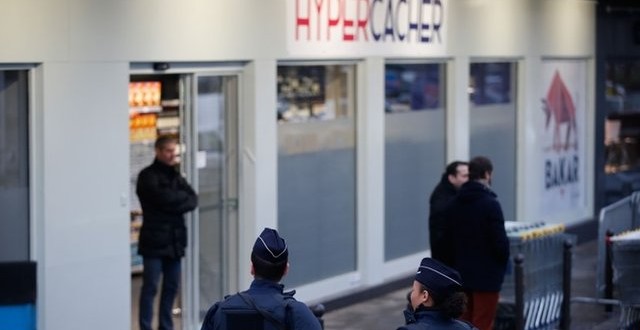 Hugh Schofield: “For the Jewish owners…the way to defy the terrorist is to show that they haven’t destroyed normality”

A Paris Jewish supermarket has reopened two months after a gunman, linked to militants who had attacked a satirical weekly, staged a hostage crisis there.

Amedy Coulibaly killed four hostages at the Hyper Cacher supermarket before he was shot dead by security forces.

He had pledged loyalty to Islamic State militants and had links to two men who attacked the offices of Charlie Hebdo magazine in January, killing 12 people.

The reopening of the kosher supermarket was praised as a sign of resilience.

“This foodstore reopens bravely to show that life is stronger than everything,” French Interior Minister Bernard Cazeneuve said, as he attended the reopening.

Meanwhile, the families of the victims of the Charlie Hebdo attack are to receive proceeds from the sale of original artwork for an Asterix cartoon.

The supermarket at Porte de Vincennes has been fully renovated since the 9 January siege.

New workers have been hired, covering for staff who were on duty at the time of the attack and are still on extended leave.

The attacks in January triggered fears of further unrest in France, which has Europe’s largest Jewish and Muslim communities.

The supermarket, like other Jewish sites in France, is now under constant police guard.

Coulibaly shot dead four Jewish men at the supermarket before security forces stormed the building, killing him and freeing the remaining hostages.

The previous day, he had shot dead a policewoman in Paris.

The gunman had a criminal record and is believed to have met Cherif Kouachi, one of the Charlie Hebdo attackers, while in prison.

Kouachi and his brother shot dead 10 journalists and two police officers in an attack on the offices of the satirical magazine in Paris.

The militants were killed at the end of a police manhunt.