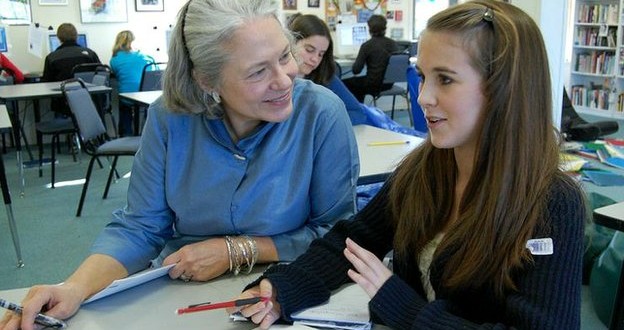 Teacher prize winner to give away $1m

Nancie Atwell, an English teacher from Maine in the United States, has been named as the winner of a competition to find the world’s best teacher, with a prize of $1m (£680,000).

But Ms Atwell has promised to donate the money from the Global Teacher Prize to the school that she founded.

There was one UK representative in the top 10, Richard Spencer, who teaches science in Middlesbrough.

The prize was created to raise the status of teaching.

The winner of the inaugural Global Teacher Prize, who received her award at the Global Education and Skills Forum in Dubai on Sunday, was recognised for her work in teaching reading and writing.

On receiving the award, she said it was a “privilege” to work as a teacher and to help young people.

Former US president, Bill Clinton, told the audience that he could still remember almost all the names of his teachers and that the prize would help to remind the public of the importance of the profession.

It was “critically important” to “attract the best people into teaching” and to hold them in “high regard”, said Mr Clinton.

We introduced the prize… to return teachers to their rightful position, belonging to one of the most respected professions in society”

In 1990, Ms Atwell founded a school, the Center for Teaching and Learning in Edgecomb, Maine, where ideas for improving the teaching of reading and writing could be tested and shared.

This school, which will receive Ms Atwell’s prize cash, has a library in every room and pupils read an average of 40 books a year.

She is also a prolific author, with nine books published about teaching, including In The Middle, which sold half a million copies.

The award has been created by the Varkey Foundation, the charitable arm of the GEMS education group, as a high-profile way of demonstrating the importance of teaching.

The attention-grabbing top prize is meant to show that teaching should be recognised as much as other high-paying careers, such as finance or sport.

“We introduced the prize in order to return teachers to their rightful position, belonging to one of the most respected professions in society,” said Sunny Varkey, founder of the Varkey Foundation.

The prize is “not only about money, it’s also about unearthing thousands of stories of inspiration”, he said.

Andreas Schleicher, the OECD’s education director, said that the status of teachers was reflected in international test results, with a high value put on teaching in high-performing Asian countries.

“Where teachers feel that society values their job, outcomes can be a lot better,” he said

Among those supporting the project have been Bill Gates, UK Prime Minister David Cameron, UN secretary-general Ban Ki-Moon and Sheikh Mohammed Bin Rashid Al Maktoum, the vice-president and prime minister of the United Arab Emirates and ruler of Dubai.

The winner was one of three US entries in the final top 10, which included Stephen Ritz, a teacher in the South Bronx in New York, who has developed a project growing food in the inner city, so that pupils can eat healthily as well as learning.

Ahead of the announcement of the winner, the US secretary for education, Arne Duncan, rang the US finalists to congratulate them.

Another finalist was Phalla Neang from Cambodia, who has been working with blind students in that country since the 1990s. She helped to develop a Braille version of the Khmer language and worked to prevent blind children from being treated as “outcasts” by the education system.

Richard Spencer displays some of his dance moves in the classroom

Richard Spencer, who teaches science at Middlesbrough College in the north east of England, was commended for his success in making science accessible, with an active style of teaching that includes using song and dance.

The international panel of judges included educators, entrepreneurs and leaders of education charities.