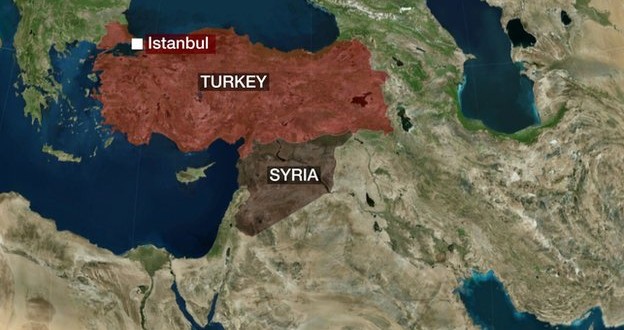 Three teenagers who were stopped from travelling to Syria from Turkey have been flown back to the UK and arrested, Scotland Yard has said.

Two boys aged 17 from north-west London and a man aged 19 were returned to the UK on Saturday night, the Met said.

They have been arrested on suspicion of preparing terrorist acts and are being held at a police station in London.

They were reported missing on Friday and were detained after UK police alerted Turkish officials, it added.

Scotland Yard said counter-terrorism officers had initially been made aware that the two 17-year-old boys had gone missing and were believed to be travelling to Syria.

Further enquiries revealed they had travelled with a third man, police added.

“Officers alerted the Turkish authorities who were able to intercept all three males, preventing travel to Syria,” a police spokesman added.

They were returned to the UK at about 23:10 GMT on Saturday and were arrested by counter-terrorism officers.

The trio had flown to Istanbul from Barcelona, in Spain, a Turkish official told the BBC.

The two 17 year olds were stopped at Istanbul’s Sabiha Gokcen airport by Turkish authorities acting on intelligence provided by British police about the pair.

However, the 19-year-old man was only detained after being questioning by Turkish police, the official said. He was also arrested at the airport.

“This is a good and a clear example of how the security cooperation between Western intelligence agencies and Turkey should work,” the official added.

Shamima Begum, Amira Abase, both 15, and Kadiza Sultana, 16 – all from London – took flights to Istanbul last month, from where it is feared they travelled to join Islamic State (IS) militants in Syria.

“On this occasion it seems that the warning was raised in the UK and that was communicated very quickly to Turkey,” our correspondent said.

‘Need to be vigilant’

It comes as a fourth missing schoolgirl – who was a friend of the three London schoolgirls – was named as Sharmeena Begum.

The 15-year-old, from Bethnal Green, is thought to have left the UK ahead of her friends in December to join IS militants.

The Home Office says there are about 600 Britons “of interest” in Syria.

The BBC understands about 100 Western volunteers – including some Britons – are fighting as part of the 30,000-strong Kurdish forces against IS, while more than 500 Britons are believed to have travelled to join IS militants.

Labour MP Keith Vaz, chairman of the Home Affairs Select Committee, welcomed the action taken by the Turkish authorities, adding: “We need to be vigilant. Clearly this flight of young people to Turkey in order to go to Syria is on a much larger scale than we envisaged.”