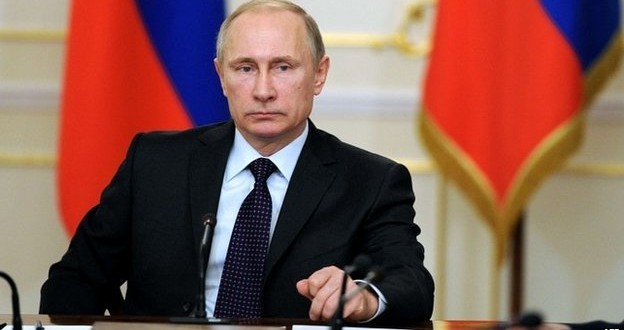 Putin ‘was ready for nuclear alert’

President Vladimir Putin has said he was ready to put Russia’s nuclear weapons on standby during tensions over the crisis in Ukraine and Crimea.

In comments in a documentary aired on state TV on Sunday, Mr Putin said the life of ex-Ukrainian leader Viktor Yanukovych had been in danger.

He also said Russians in Crimea were in danger before Russia annexed it.

In a previously released clip from the film, he said he ordered the annexation weeks before a referendum was held.

Speaking on the documentary – called The Path To The Motherland – Mr Putin said: “We never thought about severing Crimea from Ukraine until the moment that these events began, the government overthrow”.

On putting Russia’s nuclear weapons into a state of combat readiness, Mr Putin said: “We were ready to do this.”

“[Crimea] is our historical territory. Russian people live there. They were in danger. We cannot abandon them,” he added.

He said he used a “closed opinion poll” of Crimeans to judge whether they wanted to remain in Ukraine and found that “75% of the general population desired to join Russia”. No details of how the survey was conducted were given by Mr Putin.

Russia initially denied that soldiers who appeared in Crimea without military insignia on their fatigues – dubbed the “little green men” – were Russian.

But Mr Putin subsequently admitted deploying troops on the peninsula to “stand behind Crimea’s self-defence forces”.

Ukraine responded by launching an “anti-terrorist operation” against them and the region became engulfed in a conflict which has cost at least 6,000 lives, according to the UN.

Timeline: How Crimea was annexed

The Ukrainian government, Western leaders and Nato say there is clear evidence that Russia is helping the separatists with heavy weapons and soldiers. Independent experts echo that accusation.

Moscow denies it, insisting that any Russians serving with the rebels are “volunteers”.

Full details of Mr Yanukovych’s escape from Ukraine are unclear although Mr Putin spoke of Russian efforts to evacuate him and threats against his life.

“For us it became clear and we received information that there were plans not only for his capture, but, preferably for those who carried out the coup, also for his physical elimination,” Mr Putin says in the film.

He said preparations to extract Mr Yanukovych were made by land, sea and air, saying “heavy machine guns” were placed in Donetsk “so as not to waste time talking”.

Russia’s Interfax news agency quoted Mr Putin as saying that saving the life of Ukraine’s former leader and his family was a “good deed”.

The documentary was made by Andrei Kondrashov, a journalist with state-run channel Rossiya-1.

Its airing comes amid speculation over Mr Putin’s whereabouts with the Russian leader having not been seen in public since 5 March.

The Kremlin has denied rumours that the president might be sick or even dead and says Mr Putin will meet his Kyrgyz counterpart, Almazbek Atambayev, on Monday.