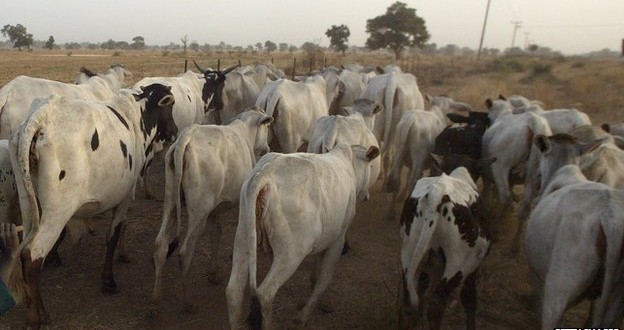 Disputes over grazing rights in Nigeria have often ended in violence

Women and children are among dozens of people killed in a dawn raid on a village in central Nigeria.

Police say 45 people died in the attack by unidentified gunman on Egba village in in Benue state.

But local politician Audu Sule told the BBC 81 villagers had been killed by the attackers, who were all armed with Kalashnikov rifles.

Clashes between herdsmen from the Fulani ethnic group and farmers over grazing rights have plagued the region.

“They opened fire on the sleepy village, killing residents including women and children,” Mr Sule said.

Police are hunting the attackers but no arrests have been made yet, state police spokesman Austin Ezeani told AFP news agency.

“This area has been volatile for some time,” he said.

Benue has a history of violent attacks and reprisals between semi-nomadic herdsmen and farmers, sometimes in revenge for cattle raiding.

Last year, at least 100 villagers were killed in central Kaduna state in an attack linked to a dispute between local farmers and herdsmen.