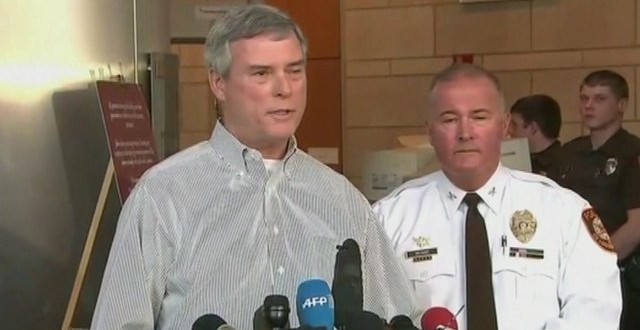 A man has been arrested in connection with the shooting of two policemen in the troubled city of Ferguson.

Jeffrey Williams, 20, has been charged with two counts of assault and gun violations.

The police officers were wounded when shots were fired at them during a protest on Thursday night.

Ferguson has been a flashpoint for race relations following the shooting of black teenager Michael Brown by a white police officer in August 2014.

Giving details of the arrest, County Prosecutor Robert McCulloh said Mr Williams had admitted to his “participation in firing the shots”, but added, “it was not certain if he had been targeting police.”

The prosecutor said that Mr Williams claimed he fired the shots from a car in a dispute with other unidentified individuals.

Mr McCulloh added that a weapon had been recovered and that Mr Williams is believed to have been the only shooter.

Mr Williams, an African-American, had taken part in the peaceful demonstration earlier in the evening outside police headquarters.

The protest followed the resignation of Ferguson’s police chief after a damning US Department of Justice report found racial bias in his department.

Eyewitness at the police shooting, Keith Rose: “I saw one officer covered in blood – I saw officers running to the aid of that officer”

The policemen were wounded in the cheek and shoulder, and have since been released from hospital.

Police chief Thomas Jackson was the sixth Ferguson official to be fired or step down. He had initially resisted calls from protesters and some state leaders to resign.

Mr Jackson was widely criticised after the shooting of 18-year-old Michael Brown in August and the weeks of demonstrations that followed.

The Justice Department report found substantial evidence of intentional discrimination in the police and justice system.

The report contended that African-Americans were at the receiving end of 90% of officers’ use of force.

In November, a St Louis County grand jury found that white police officer Darren Wilson did not break any laws when he shot Brown.

Police across the country have faced criticism following the deaths of a series of black men in contentious circumstances.