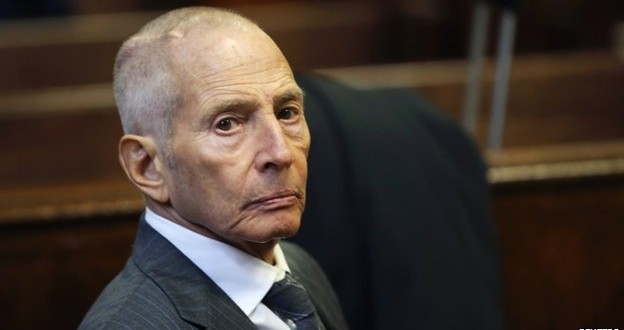 US tycoon says he ‘killed them all’

Robert Durst has been the subject of the HBO documentary The Jinx: The Life and Deaths of Robert Durst

US tycoon Robert Durst has been arrested on a murder charge just before the finale of a TV show investigating the alleged crime.

He was detained in New Orleans after a warrant was issued by Los Angeles police investigating the murder of mobster’s daughter Susan Berman.

Mr Durst has always maintained his innocence in the murder in 2000.

But HBO’s The Jinx catches him on tape apparently confessing to three killings, saying “[I] killed them all”.

The show suggested in a previous episode that Mr Durst had written a letter only Ms Berman’s killer could have sent.

It sought to match handwriting on a letter from Mr Durst to Ms Berman with that on an anonymous letter sent to police alerting them to a dead body in the victim’s home.

Mr Durst’s lawyer, Chip Lewis, said his client would not challenge his transfer to Los Angeles and would continue to maintain his innocence.

But the tycoon’s estranged family thanked the authorities.

“We are relieved and also grateful to everyone who assisted in the arrest of Robert Durst,” said his brother, real estate developer Douglas Durst, in a statement quoted by the Associated Press news agency.

“We hope he will finally be held accountable.”

The 71-year-old had been previously questioned by police investigating Ms Berman’s execution-style killing.

Ms Berman, whose father David Berman was an associate of Las Vegas mobsters Bugsy Siegel and Meyer Lansky, was killed with a bullet to the back of her head in her home, just as investigators prepared to question her about Kathleen’s disappearance.

In the TV programme which aired on Sunday, Mr Durst is challenged about the letter evidence in a long interview.

According to filmmakers, he was still wearing his microphone when he went into a hotel bathroom after the interview at a hotel, and he apparently spoke out loud to himself.

He can be heard saying “There it is, you’re caught” and “What the hell did I do? Killed them all, of course”.