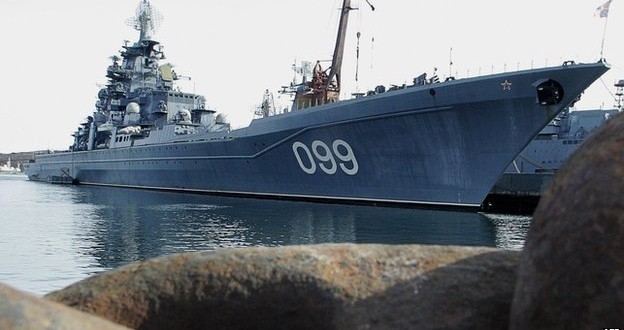 The warship Pyotr Veliky in Severomorsk – a key Arctic naval base

President Vladimir Putin has put Russia’s navy on a state of full combat readiness in the Arctic as part of major military drills, reports say.

The announcement came amid intense speculation over Mr Putin’s health and whereabouts, as he has not been seen in public since 5 March.

He is scheduled to meet the President of Kyrgyzstan, Almazbek Atambayev, in St Petersburg shortly.

The drills come amid heightened tensions with Nato over Russia’s military involvement in eastern Ukraine, where an uneasy truce is in place between pro-Russian separatists and Ukrainian government troops.

Nato has sent extra forces to the three Baltic states, which have large Russian minorities and were ruled from Moscow in the Cold War.

A spokesman for President Putin has denied rumours that he is unwell – rumours that started after a trip to Kazakhstan, scheduled for Thursday and Friday, was postponed.