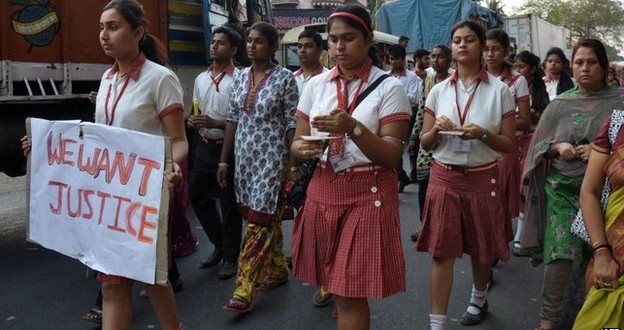 The students of the convent have protested against the incident

Thousands of people are expected to join a silent procession in protest against the rape of an elderly nun in the Indian state of West Bengal.

Ten men have been detained in connection with the incident which happened early on Saturday morning.

But none of them resemble the six alleged attackers who were caught on CCTV burgling the convent before the 74-year-old nun was raped.

The nun is in a stable condition in a Kolkata (Calcutta) hospital.

The attackers ransacked the convent school in Ranaghat and stole money before raping the nun in the convent itself.

The Chief Minister of West Bengal Mamata Banerjee has promised swift and strong action against those involved. The special police service of the state, the CID, has taken over the investigation.

Monday’s “solidarity” rally in Kolkata will have “no speeches”, reports quoting a statement from the city’s diocese said. A candlelit vigil for the victim will be also held.

The city’s Archbishop Thomas D’Souza said in a statement that it was important to ensure that “an inhuman act” like this should not take place again.

“It has brought a lot of shame and pain to all concerned”.

The police are also investigating reports that the attack on the nun could have been an act of revenge.

The Calcutta Telegraph reports the convent had received threats after the recent expulsion of a pupil.

“The principal of the school called me up and sought police protection. After receiving the complaint over the phone, I took the initiative of sending policemen there. The policemen rushed there and dispersed the troublemakers,” senior police official Rajarshi Mitra told the newspaper.

Father D’Souza said the assailants in Saturday’s attack stole money from the school, vandalised the chapel, broke open the tabernacle and took away the ciborium – the sacred vessel used during Mass.

Christian groups have recently held protests in the capital, Delhi, saying they are being targeted and demanding better protection.

Some highlight a series of recent attacks by vandals on churches in the city.