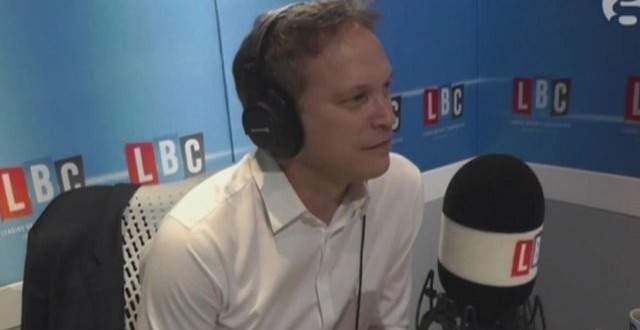 Shapps: I screwed up over job dates

Grant Shapps speaking on LBC last month: “To be absolutely clear I don’t have a second job”

Conservative Party chairman Grant Shapps has said he “screwed up” in a recent interview when he suggested he never had a “second job” while an MP.

Mr Shapps admitted he had “over firmly” denied continuing his writing career – under the pen name Michael Green – when he entered the Commons in 2005.

Labour wants an inquiry into whether his outside interests, which were fully declared at the time, breached rules.

But Conservative sources said he did not regard it as a second job.

In an interview with LBC Radio three weeks ago, Mr Shapps said it was “absolutely clear” he was not doing business as Michael Green while he was an MP, saying “I did not have a second job while being an MP, end of story”.

However, Mr Shapps has now acknowledged that he was mistaken “over the dates” of his outside employment during the interview.

This came after the Guardian issued what it says is a recording of a sales pitch made in the summer of 2006 in which Mr Shapps, using his Michael Green pen name, says he will be running his “mentoring programme” to hire staff and produce software to create websites.

There are no rules banning MPs from having other sources of employment, but they do have to declare any paid employment outside Parliament.

2000: Grant Shapps and his wife Belinda launch How to Corp Ltd

March 2005: The business is incorporated

May 2005: Grant Shapps is elected MP for Welwyn Hatfield

November 2005: Grant Shapps declares his interest in How to Corp Ltd in the Commons Register of Members’ Interests

2012: Police decide not to launch investigation into software sales by How to Corp following a Labour complaint

2013: How to Corp Ltd reportedly dissolved

Mr Shapps’ directorship and shareholding in the firm How to Corp Ltd – which featured him under the name Michael Green – was declared in the Parliamentary register of members interest. for 2005 to 2008.

And Conservative sources said Mr Shapps did not regard his interest in his firm as “a second job” – as the company was being wound up at the time – and more of “a hobby on the side”.

They said he had earned minimal income from the job and likened his earnings to those made by other MPs who have written books.

A spokesman said: “Like many authors and journalists, Grant wrote with a pen name. This was completely transparent: his full name and biographical details were permanently published on the company’s main website.”

In his first entry in the register after being elected in November 2005, Mr Shapps declared paid directorships and shareholdings in Printhouse Corporation and marketing firm How to Corp. He continued to declare the paid directorship with How to Corp for several years afterwards, the last entry coming in June 2008.

The source said: “It turns on the semantics of what constitutes a second job.”

Conservative colleagues have voiced their support for Mr Shapps, Health Secretary Jeremy Hunt suggesting the criticism of him was “incredible”.

He tweeted: “His sin not to use pseudonym but to write books about how to create wealth – shock horror.”

But Labour MP John Mann suggested Mr Shapps should consider his position as minister without portfolio in the government.