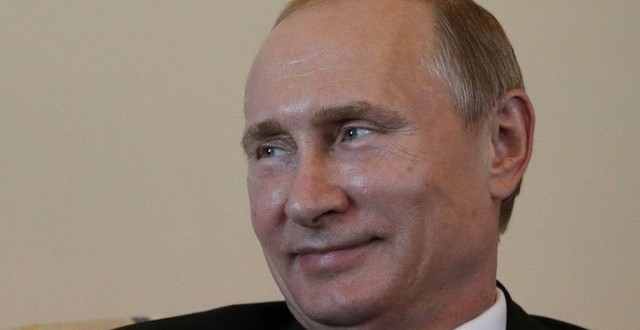 Russian President Vladimir Putin has laughed off speculation about his health after making his first appearance in public since 5 March.

Life “would be boring without gossip”, he told Kyrgyz President Almazbek Atambayev at talks in St Petersburg.

The 62-year-old appeared relaxed and smiled before the television cameras.

His disappearance from public view had sparked rumours that he might have fallen ill, died, been removed in a coup, or once again become a father.

Earlier on Monday, Mr Putin ordered the Russian navy’s Northern Fleet on to a state of full combat readiness in the Arctic.

It came as more than 45,000 troops, as well as warplanes and submarines, started major military exercises across northern Russia.

A brief video of Mr Putin’s meeting with his Kyrgyz counterpart at the Constantine Palace in Russia’s second city was broadcast by state television without sound.

The Russian leader prides himself on his macho image

There was no obvious sign that Mr Putin had been or still was suffering from any medical condition, says the BBC’s Richard Galpin in Moscow.

Asked by reporters about the speculation on his health, the Russian leader replied: “It would be boring without gossip.”

Finally the mysterious Mr Putin has been found.

It is now official: he is neither dead nor would it seem has he been stricken by some life-threatening illness. In fact he looked reasonably healthy in the video broadcast of the meeting with his Kyrgyz counterpart Almazbek Atambayev in St Petersburg.

But while the Kremlin press office is having the last laugh about all the wild rumours of the past week, it’s still saying nothing about why he cancelled meetings and was not seen in public for what was, for him, a long absence.

And so at least some of the rumours may persist about what was happening behind the scenes.

What is known is that on this the day of his return to the limelight, he has ordered the northern fleet of the Russian navy to conduct a massive combat readiness exercise.

This comes as the US continues to deliver military equipment to the Baltic states and Poland, and while Nato navy exercises continue in the Black Sea. So it’s straight back to business as usual.

Where has Putin been? The best of the memes

Mr Atambayev, for his part, said Mr Putin had driven him around the palace for 20 minutes before the meeting. “I can confirm that he’s in excellent form,” he was quoted by one journalist as saying.

The internet responded to Mr Putin’s vanishing act with memes

Last week, he cancelled a number of scheduled events, including a visit to Kazakhstan that was due to take place on Thursday and Friday, and the signing of an agreement with South Ossetia.

As speculation about Mr Putin’s disappearance mounted, the hashtag #Putinumer (#Putinisdead) trended on Twitter. Kremlin spokesman Dmitry Peskov was forced to counter questions about each rumour, dismissing them as “March madness”.

“So everyone has now seen the paralysed president captured by a general who has just returned from Switzerland where he was delivering a baby?” Mr Peskov asked journalists sarcastically on Monday.

He said Mr Putin and Mr Atambayev had met at the Constantine Palace because the Kyrgyz leader’s daughter was studying nearby.

Mr Putin’s reappearance coincides with the first anniversary of a controversial referendum in Crimea, which Russia used as justification for annexing the Ukrainian peninsula.

The warship Pyotr Veliky in Severomorsk: Russia is testing combat capabilities in the Arctic

In a pre-recorded interview which aired on Sunday, Mr Putin said he had been ready to put nuclear Putin laughs off absence rumours weapons on standby at the time.

“The EU reaffirms its deep concern at the continuous military build-up and deterioration of the human rights situation in the Crimean peninsula, including the denial of free speech and the persecution of persons belonging to minorities,” she said in a statement.

The Ukrainian President Petro Poroshenko urged the European Union on Monday to renew its threat of further sanctions against Russia if Moscow does not implement the Minsk agreement.

The accord calls for a ceasefire and demilitarised buffer zones in eastern Ukraine between government forces and Russian-backed rebels.

Mr Poroshenko was speaking after talks in Berlin with German Chancellor Angela Merkel, who had helped negotiate the ceasefire deal.

He said if the commitments were not fulfilled, he hoped that EU leaders would say very clearly at their summit on Thursday that sanctions would “be stepped up”.