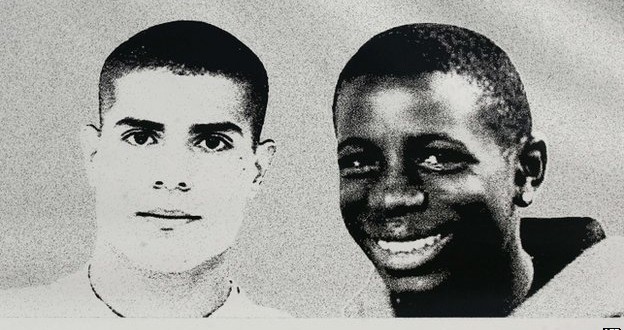 Two police officers have gone on trial in a French court accused of failing to help two boys whose deaths at a power substation prompted weeks of rioting.

Bouna Traore, 15, and Zyed Benna, 17, were electrocuted in the Paris suburb of Clichy-sous-Bois in October 2005.

Police had chased the boys as they made their way home from a football match.

Almost 10 years on, a court in Rennes will decide whether Sebastien Gaillemin and Stephanie Klein knew the boys were in danger but did nothing to help.

The case has dragged through the courts for years, with France’s highest court overturning in 2012 a ruling that dropped a “failure to help” charge against them.

Police were called when a neighbour saw a group of boys crossing a building site. Three of the youths entered the EDF power facility and one survived with severe burns.

Muhittin Altun, now 26, was badly burned at the substation in a suburb of Paris

Clichy is one of France’s most notorious immigrant “banlieues” (suburbs).

The 21 days of rioting that followed in communities across France led to the first state of emergency for more than 20 years.

The banlieues have long been seen as breeding grounds for political and religious extremists and Prime Minister Manuel Valls spoke of a “territorial, social and ethnic apartheid” in France’s ghettoes in January, days after the Paris attacks that left 17 people killed.

Mr Gaillemin, 41, is said to have radioed to colleagues for help at the time, saying he expected the boys to leave the substation but adding: “If they enter the site there’s not much hope they’ll make it alive”.

His radio contact is expected to form part of the five-day trial, to be attended by relatives of the two boys who died as well as Muhittin Altun, who survived.

The police officers’ lawyer, Daniel Merchat, told French TV that Mr Gaillemin had spoken hypothetically about the teenagers entering the substation, which was very different from seeing them going in.

Bouna Traore’s elder brother Siyakha told French media that the family had waited for the trial for so long. “According to the day and my mood, I’m either optimistic… or not.”

If found guilty of failing to help individuals in danger, the two officers could face up to five years in prison and up to €75,000 (£53,000) in fines.