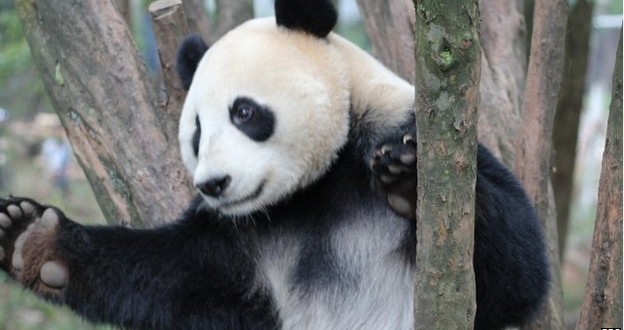 Pandas usually use their teeth for munching bamboo

A man in north-west China has been awarded $80,000 in compensation after being bitten by a wild panda.

The panda was chased onto the man’s farm last year by local officials trying to capture it, believing it to be sick, the Lanzhou Evening News said.

Despite their cuddly reputation, their strong jaw muscles and large teeth give pandas a powerful bite.

The incident, in March 2014, began when a local man called officials after finding a mud-covered wild panda wandering in the forest near Liziba village in north-western Gansu province.

A group of officials called on villagers for their help in finding the panda and on being confronted, the animal took fright and bolted onto Mr Guan’s land, the newspaper reported.

Mr Guan, faced with the approaching panda, froze and the panda bit him on the left leg.

“It was a piercing pain and blood immediately started flowing,” Mr Guan told the paper.

Mr Guan, in his late 60s, sued the officials for mishandling the situation.

He is reported to be satisfied with his compensation, saying it will cover his medical bills. He had seven hours of surgery and may need further operations, the paper said.