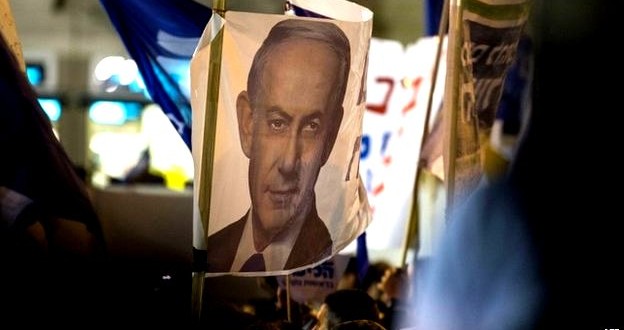 Benjamin Netanyahu is facing a strong challenge from the centre-left

Rival party leaders in Israel are making their final appeals to voters on the last day of campaigning ahead of keenly contested elections on Tuesday.

Prime Minister Benjamin Netanyahu used a speech at a Jewish settlement on Monday to try to bolster his support.

Mr Netanyahu faces a challenge from a centre-left alliance that has promised to repair ties with the Palestinians and the international community.

Neither side is expected to get more than a quarter of the votes.

Correspondents say the election is likely to be followed by a lengthy period of negotiations over the formation of the next coalition government.

However, the BBC’s Kevin Connolly in Jerusalem says that it might still be possible for Mr Netanyahu to form a coalition government even if his Likud party fails to top the poll.

On Monday, Mr Netanyahu spoke at a settlement in East Jerusalem and said he was the only person who could ensure the city’s security.

He said no Palestinian state would be formed were he to remain prime minister.

The Zionist Union, co-led by Yitzhak Herzog, appears set to win the most seats

In an interview with the Walla news website on Monday, Mr Netanyahu accused the opposition of being prepared “to bow their heads to any dictate, including to a nuclear deal [between world powers] with Iran”.

But Zionist Union party co-leader Yitzhak Herzog, whose alliance has been leading Likud in pre-election polls, has accused Mr Netanyahu of “panicking”.

Visiting the Western Wall, one of the holiest sites in Judaism, on Sunday, he pledged to “safeguard Jerusalem and its residents in actions, not just words, more than any other leader”.

Both candidates also used Monday to appeal to the supporters of other parties to back them, and avoid seeing the vote splintered between several parties. There are nine candidates for the presidency.

Indications are that whichever party performs best, they could need the support of new centrist party Kulanu in order to build a coalition, though its leader, Moshe Kahlon, has not yet said who he will back.