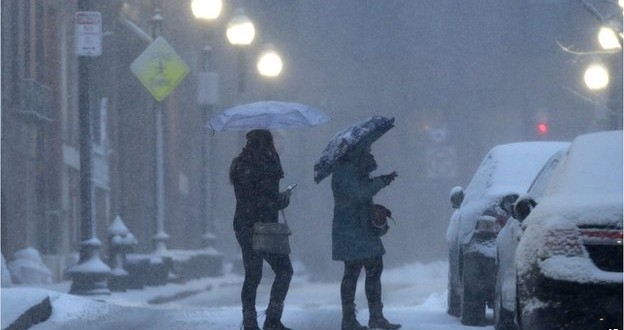 Boston has broken the record for the snowiest winter in the city’s recorded history.

This season, the Massachusetts city saw more snowfall than any winter since 1872, when records were first kept.

“Boston, you survived the snowiest winter on record!!!” the local branch of the National Weather Service wrote on its Facebook page.

This winter, Boston has been forced to close schools, public transit, and businesses as it has dealt with the record snow.

The winter has been the snowiest since 1872, when records were first kept

Before the record-breaking snow began to fall, the city hosted a St Patrick’s Parade in its slush-lined streets. Earlier this winter, it celebrated the New England Patriots’ Super Bowl championship win with a parade, despite the snow.

The city’s mayor, Marty Walsh tweeted: “Super Bowls, World Series’, Stanley Cups, and snowfall records. We are truly a title city. There will be no parade.”

There is the potential that this season’s record could grow. In years past, the city has recorded several inches of snow during the month of March.

Other US cities have recorded far more snow. The small village of Copenhagen, New York has recorded more than 240in of snow, the Los Angeles Times newspaper reported.

The snowfall season is recorded from 1 July to 30 June each year.