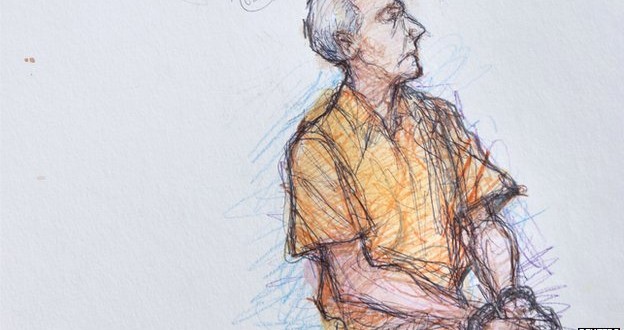 A lawyer for an American millionaire accused of murder says his client is innocent and is ready to stand trial.

Robert Durst was recorded saying in private that he had “killed them all”, in a documentary about his connections to three unsolved deaths.

Earlier, another lawyer told a Fox News host, “you’ve said things under your breath that you probably didn’t mean”.

The former real estate tycoon was arrested at a hotel in New Orleans on Saturday.

Wearing an orange jumpsuit and with his hands shackled at his waist, Mr Durst appeared before a judge in New Orleans on Monday and agreed to be transferred to Los Angeles.

He faces a first-degree murder charge in Los Angeles for the shooting death of his friend Susan Berman in 2000.

The 71-year-old has always maintained his innocence in Berman’s murder.

The film’s director, Andrew Jarecki, said he gave “the relevant evidence to law enforcement some months ago”

Speaking after the extradition hearing, defence lawyer Dick DeGuerin said: “We came here to waive jurisdiction and to go back to California and to get it on. Bob Durst didn’t kill Susan Berman. He’s ready to end all the rumour and speculation and have a trial.”

He added that the transfer to Los Angeles may be delayed because authorities in New Orleans are considering other charges. DeGuerin did not elaborate on the possible charges.

Robert Durst: A life of violence

The millionaire has long been suspected in the death of his wife, Kathleen Durst, who went missing from their country home in New York State in 1982.

Berman, whose father was an associate of Las Vegas mobsters Bugsy Siegel and Meyer Lansky, was a close friend of Mr Durst and also acted as his spokeswoman.

She was shot in the back of the head at her home in Los Angeles as investigators from New York prepared to question her over the disappearance of Kathleen Durst.

After Berman’s death, the eccentric Mr Durst moved to Texas and posed as a mute woman.

In 2001, he was acquitted of murder after his defence team convinced a jury that Mr Durst was acting in self-defence when he killed and dismembered his elderly neighbour, Morris Black.

Mr Durst was arrested on Saturday by FBI agents acting on an arrest warrant issued by Los Angeles prosecutors as he walked into a hotel in New Orleans where he had checked in under a false name.

Los Angeles police said the arrest resulted from “investigative leads and additional evidence that has come to light in the last year”.

But Mr Lewis said the arrest was orchestrated in co-ordination with an HBO documentary, The Jinx: The Life and Deaths of Robert Durst, which included lengthy interviews with Mr Durst.

The final episode, broadcast on Sunday night, included what appeared to be a confession to the killings of Berman, Kathleen Durst and Black.

According to the filmmakers, Mr Durst was still wearing a wireless microphone when he went into a hotel bathroom after the interview.

“There it is, you’re caught,” he whispered to himself. “What the hell did I do? Killed them all, of course.”

It is not known if he is speaking sincerely in the recording, but it came after he was asked whether he had written a letter only Berman’s killer could have sent.

The filmmakers found similarities between handwriting on a letter from Mr Durst to Berman and that on an anonymous note sent to police alerting them to a dead body in the victim’s home. The word “Beverly” is also misspelled as “Beverley” on both documents.