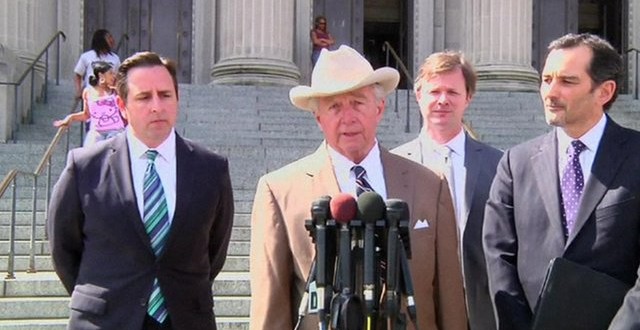 US tycoon Durst charged with murder

A US millionaire who was recorded in private appearing to confess to three killings has been charged with murder in Los Angeles.

Robert Durst was filming a documentary about his connections to three deaths when he remarked off camera he had “killed them all”.

Prosecutors charged the former property tycoon with murdering his friend Susan Berman. He may face the death penalty.

Earlier, his lawyer told Fox News he had not meant what he said.

Mr Durst was arrested in New Orleans on Saturday, a day before the final episode of an HBO series called The Jinx: The Life and Deaths of Robert Durst.

He appeared in court on Monday and agreed to be taken to Los Angeles, where prosecutors announced later that day a first-degree murder charge.

Ms Berman had acted as Mr Durst’s spokeswoman and was about to be questioned by police when she was shot in the back of the head at home in Los Angeles in 2000.

Durst appeared in court in New Orleans on Monday

In 2003, Durst was acquitted of murdering his neighbour in Texas

Robert Durst: A life of violence

The tycoon had long been suspected in the death of his wife, Kathleen Durst, who went missing from their country home in New York State in 1982.

After Ms Berman’s death, he moved to Texas, where he was acquitted of the murder of his elderly neighbour, Morris Black, despite admitting to cutting up the body in a panic after killing him in self-defence.

Then Mr Durst was arrested on Saturday by FBI agents acting on an arrest warrant issued by Los Angeles prosecutors.

The following night, HBO viewers heard Mr Durst muttering to himself in a hotel bathroom while still wearing a wireless microphone.

“There it is, you’re caught,” he whispered to himself. “What the hell did I do? Killed them all, of course.”

The remarks came after the filmmakers asked him whether he had written a letter only Berman’s killer could have sent.