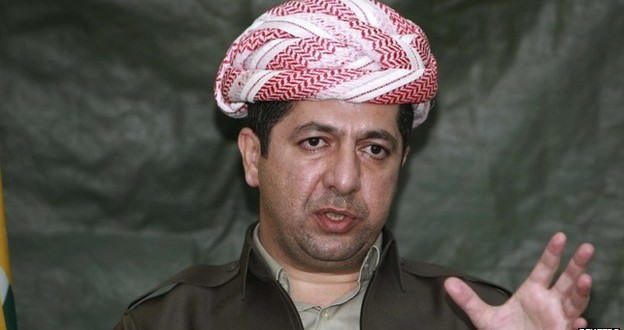 A senior Kurdish official in Iraq has voiced concern over Iranian-backed Shia Muslim militias fighting with Iraq’s army against Islamic State (IS).

Iraqi Kurdistan intelligence chief Masrour Barzani told the BBC the use of such militias could create a bigger problem than IS itself by exacerbating tensions with Sunni Muslims.

Some 20,000 militia fighters and 3,000 Iraqi soldiers are trying to oust IS from the city of Tikrit.

It is Iraq’s biggest offensive so far.

However, operations were put on hold on Monday to minimise civilian and military casualties in and around the northern city, Iraqi officials said.

They said that IS fighters were now confined to an area of the city centre.

Iraq considers Tikrit’s recapture as a vital stepping stone to other IS-held territory, including Mosul – the country’s second largest city.

In a separate development, the tomb of ousted Iraqi leader Saddam Hussein was almost completely levelled in fighting near Tikrit.

Footage filmed by AP news agency shows that all that remains standing of the once-lavish mausoleum in the village of al-Awja is some pillars.

In the BBC interview, Mr Barzani strongly criticised the government in Baghdad for using the Popular Mobilisation militias, who had largely eclipsed the Iraqi army in the battle for the predominantly Sunni Tikrit.

“This is going to create a bigger problem than ISIS [IS],” he said.

“All of us have to together fight ISIS. But if revenge, retaliation between sects or religions, ethnic groups happens, then this will become a much more difficult problem.”

Shia militia leaders have vowed to seek revenge for the massacre by IS fighters and allied Sunni tribesmen of at least 700 soldiers, most of them Shia, at Camp Speicher outside Tikrit last June.

Mr Barzani was also clearly furious that the Shia militias – as well as the administration in IS-held areas – were being paid by the government in Baghdad while it was withholding budget funds from Kurdistan and its Peshmerga forces battling IS, the BBC’s Jim Muir in northern Iraq says.

“They [Iraq’s government] are paying Mosul, they are paying Anbar, which are under the control of ISIS. Why aren’t they paying Kurdistan, who is an ally? We are fighting a common enemy, how come we are not getting the appropriate support?”

The central government in Iraq has not been funding Kurdish areas in the north because of an oil production row.