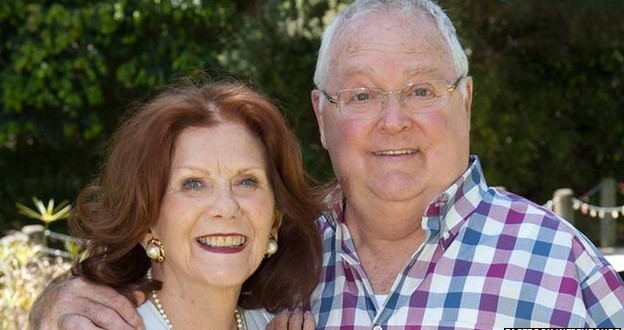 Madge and Harold Bishop are due to return to the programme, despite Madge’s death in 2001

Australian soap Neighbours will celebrate 30 years on television on Wednesday with the return of popular stars from the programme’s past.

The soap was a launch pad for numerous pop and Hollywood stars, including Kylie Minogue and Russell Crowe.

Since the show was first broadcast in 1985, it has been watched in more than 60 countries around the world.

Despite rumours that she would return to the programme’s famous Ramsay Street, Ms Minogue last year ruled out appearing in the anniversary programme.

Back from the dead

Some of the show’s other more famous alumni – including actors Jason Donovan and Guy Pearce and singer Natalie Imbruglia – are also expected to be absent.

But two of the programme’s most beloved characters are reportedly making an appearance, possibly from beyond the grave.

Madge and Harold Bishop, played by Anne Charleston and Ian Smith, are expected to be among the cast on Wednesday, despite Madge having died of pancreatic cancer in 2001.

It was not known how she would be reincarnated – there are no official details yet on the storyline surrounding their return – but several strange dream sequences in the show’s past suggest she could feature via someone else’s subconscious.

Ian Smith, who plays Harold. said: “I spent half my working life on Neighbours and so it’s lovely to be back with Anne and all the cast and crew.”

He retired from Neighbours in 2009.

Another former cast member known to be dropping by the fictional Melbourne suburb of Erinsborough – an anagram of Neighbours – is Delta Goodrem, who played Nina Tucker before going to a successful pop career.

The wedding of Kylie Minogue and Jason Donovan – Charlene and Scott – drew 19.6m viewers in the UK

The episode will also feature Jackie Woodburne, who has played Susan Kennedy in nearly 5,000 episodes in her 20 years with the show.

Neighbours built up a loyal fanbase in the UK, where it debuted in 1986 – 18 months after Australia – and was screened daily by the BBC for years before moving to Channel 5.

Approximately one million people tune in every day to watch the show in the UK, compared with around 350,000 in Australia.

The drama reached its peak in the UK in 1990, when its two daily screenings drew a combined audience of 19 million.