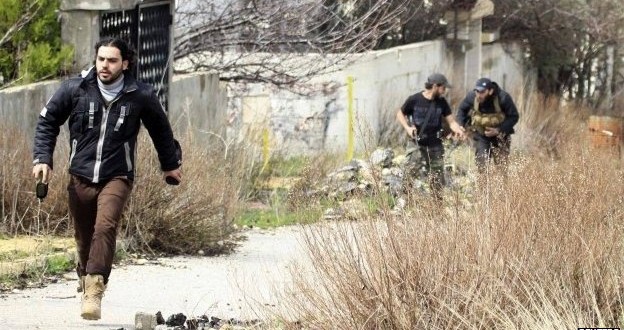 Assad calls for US action on talks

More than 220,000 people are believed to have been killed in the Syrian conflict the past four years

Syria’s president is awaiting “actions” from the US after Secretary of State John Kerry said negotiations to end the country’s conflict should include him.

Bashar al-Assad said he would welcome any “sincere” change in attitude.

But he reiterated that talks on his future were “for the Syrian people” alone and that “all the declarations from the outside do not concern us”.

The Western-backed opposition and rebel groups have long insisted Mr Assad can have no role in the country’s future.

More than 220,000 people are believed to have been killed since protests against his rule erupted four years ago. A further 11.5 million people have been forced to flee their homes.

On Sunday, Mr Kerry told CBS News that the US government was “working very hard with other interested parties to see if we can reignite a diplomatic outcome” to the conflict.

Mr Kerry: “There is no military solution. There is only a political solution”

Asked if Washington would be willing to negotiate with Mr Assad, Mr Kerry said: “We have to negotiate in the end.”

State department spokeswoman Marie Harf later denied that the comments marked a shift in policy and stressed that Washington was not open to direct talks with Mr Assad.

“By necessity, there has always been a need for representatives of the Assad regime to be a part of this process,” Ms Harf said. “It has never been and would not be Assad who would negotiate – and the secretary was not saying that.”

On Monday, Mr Assad responded to Mr Kerry’s remarks by saying that any “sincere” change in attitude within the international community regarding the situation in Syria would be positive.

“We are still hearing the declarations and we should wait for actions and then decide,” he said in comments broadcast on Syrian state television.

Any such move, he added, should start with Western and neighbouring countries “ceasing political support to terrorists, stop financing them and stop sending weapons”. The government in Damascus uses the term “terrorist” to describe those who oppose the president.

Mr Assad also said that it was for Syrians to determine his future.

“Anything coming from outside the [Syrian] borders is just words that vanish eventually. So it doesn’t matter if they say [the president] stays or goes, or if they’ve changed their mind or not, what matters is reality.”

The main Western-backed opposition alliance, the National Coalition, meanwhile reacted to Mr Kerry’s remarks by saying in a statement that “bringing down the head of the regime and all officials responsible for crimes against the Syrian people” was one of its main goals.

France said its goal was “a negotiated political settlement between the different Syrian parties that leads to a unity government”. “It is clear for us that Bashar al-Assad cannot be in this framework,” it added.