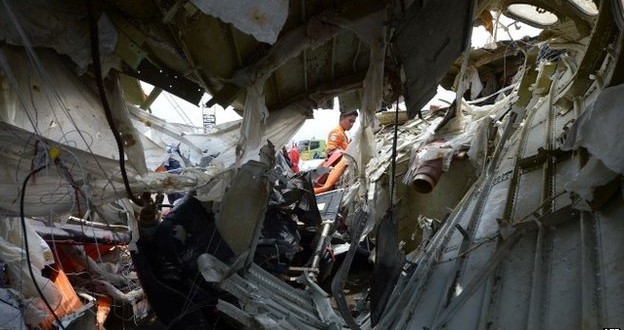 The final part of the fuselage has now been recovered

The search for remaining bodies from a plane crash in the Java Sea ends on Tuesday night, the head of Indonesia’s rescue agency has confirmed.

The ships involved in the search will then be pulled out on Wednesday, Bambang Soelistyo told the BBC.

AirAsia lost contact with flight QZ 8501 on 28 December as it was flying from Surabaya in Indonesia to Singapore with 162 people on board.

The search effort has recovered 106 bodies, with 56 unaccounted for.

The families of those missing are disappointed but understand that the search cannot go on indefinitely, reports the BBC’s Alice Budisatrijo in Jakarta.

Frangky Chandra, the older brother of Gani Chandra, an Indonesian man who was on board the plane, and whose body has not been found, said it was difficult for his family to move on.

“We will never stop waiting,” Mr Chandra told the BBC.

He said “the most important thing” was that DV1, the official search team, has said it will help with the identification process if any more bodies are found.

Tony Fernandes, the CEO of AirAsia, told reporters last week that he was satisfied with the search operation.

“We have been successful… To get more than 50% is considered a huge success,” he said.

But he added that the search could not “go on indefinitely”.

The fuselage of the crashed plane was located in the Java Sea in mid January and the final part of it that was recoverable was removed at the end of February. Divers established that those elements of fuselage that had to be left in the sea did not contain any bodies.

The bodies that were recovered were mostly found in and around the wreckage, with a few discovered some 1,000km away, off the Indonesian island of Sulawesi. Three were found as recently as 14 March.

The plane’s two “black box” flight recorders were also found. They revealed several alarms were “screaming”, drowning out the sound of the pilots’ voices.

Indonesia’s transport minister has said that radar data showed the plane climbing at an abnormally high rate. This could have caused it to stall, experts say.

The plane is thought to have been attempting to fly above a storm. The pilot’s last contact was a request to divert around bad weather.

The less experienced co-pilot was at the controls at the time, investigators have said.