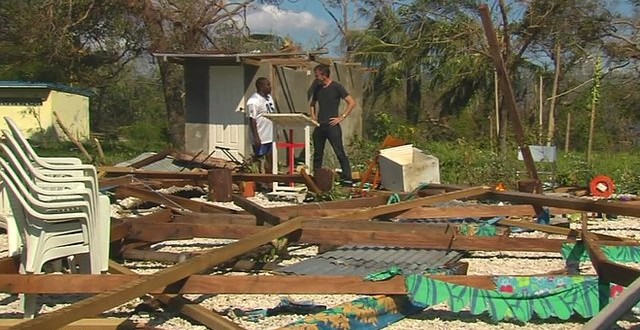 People on this island are going hungry, the BBC’s Jon Donnison reports

People living on a remote island in the north-west of Vanuatu are having to drink harmful saltwater following last week’s cyclone, the BBC has discovered.

Residents of Moso say they are still waiting for outside help to arrive.

Aid agencies have begun trying to access the country’s small outer islands, but flooding has stopped their planes from landing in some areas.

One pilot said the lush landscape had been transformed and now looked as if it had been destroyed by a bush fire.

In addition to drinking water shortages, officials say there is also a desperate need for food and shelter, with tens of thousands of people now homeless.

Drinking saltwater is damaging as the more a person drinks, the more water already present in the body is rerouted to help dilute the excess of salt.

It can lead to dehydration and death.

The United Nations has revised the official number of people killed by the cyclone, bringing it down to 11 from an earlier figure of 24.

The relatively low number of casualties has been attributed to the advance warnings that were issued.

Aid flown in from Australia is beginning to arrive in Vanuatu

The clean-up operation has begun in earnest in Port Vila

Prime Minister Joe Natuman told the BBC that the full extent of the damage across the islands was still not clear.

He said that the more heavily populated islands of Tanna and Efate received most of the damage.

“The other islands should be okay,” he said, “except maybe one group.”

Local people and aid agencies say that the rebuilding effort will be immense.

At the scene: BBC’s Jon Donnison in Moso

Four days after Cyclone Pam ripped through Vanuatu the full extent of the damage is still not known. Many of the more than 60 inhabited islands remain cut off.

We travelled by boat to Moso, the first people to visit since the cyclone struck. Villagers in the community of Taseriki told us they had received no help whatsoever since the storm. Many houses are completely flattened.

There are no shops, people grow their own food, and their crops have been destroyed. One man told us his children were going hungry, having to scavenge what they could find.

Villagers have been having to drink saltwater for two days. You cannot survive like that for long. The death toll across Vanuatu remains thankfully low. But the suffering is immense.

Getting aid to the islands has proven difficult because of a lack of landing strips or deepwater ports.

The government is planning to set up a relay system known as “air bridges”, where a large plane goes to a provincial capital, with lighter aircraft or boats being dispatched to surrounding islands.

Tanna island has a population of about 30,000 people and is about 200km (124 miles) south of Port Vila. It was directly in the path of the cyclone and all of its crops and most of its houses have been destroyed.

Tom Perry from Care Australia said relief workers in Tanna reported the hospital was functioning but had no roof.

Similar damage was reported by Save the Children in Tongoa – a small island that has about 3,000 people – where 95% of homes are estimated to have been destroyed.

Communication to many of the islands is still down

The category five storm hit Vanuatu on Saturday, bringing wind gusts of up to 300km/h

Communication to many of the other 80 islands in the archipelago is still down and officials have warned survivors could quickly run out of food.

The category five storm hit Vanuatu on Saturday, bringing wind gusts of up to 300km/h (185mph).

Many people have lost their homes or face extensive rebuilding. Telecommunications, power and water supplies have all been badly affected.

In Port Vila, power and water have been restored in some areas, with officials reporting good progress in the clear-up operation, despite up to 90% of homes being damaged.

“The main roads around the island are expected to be cleared by tomorrow,” a Unicef spokeswoman said.

One woman in Port Vila told the BBC that the scale of the destruction was immense – with curled up corrugated iron everywhere.

The president, returning from a conference in Japan, has described the storm as a “monster” linked to climate change, citing changing weather patterns, rising seas and heavier-than-average rain in Vanuatu.

Australia announced on Tuesday that it was sending more personnel, including a search and rescue team, and three more military planes carrying aid.

How poor is Vanuatu?