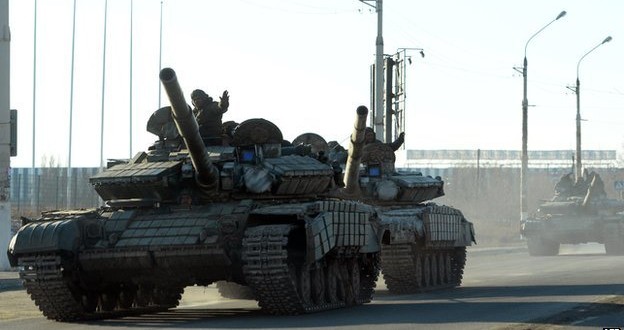 A dispute about the proposed “special status” of rebel-held areas in eastern Ukraine is threatening the fragile ceasefire deal agreed last month.

Russia has accused Ukraine’s President Petro Poroshenko of introducing new conditions that were not agreed in Minsk, where the deal was signed.

The deal says a special status will be granted to parts of Donetsk and Luhansk regions, linked to wider autonomy.

Ukrainian MPs are discussing the status issue, so far without agreement.

The ceasefire took effect on 15 February and has held despite sporadic clashes. Some heavy weapons have been withdrawn from the combat zone.

Self-government for the pro-Russian rebel areas was a key part of the Minsk deal. Mr Poroshenko’s new legislative proposals are aimed at furthering that agreement.

The ministry said President Poroshenko had “totally ignored” Minsk provisions calling for dialogue with the pro-Russian rebels on arrangements for local elections and the regions’ future status.

A statement from a Donetsk rebel leader, Denis Pushilin, also castigated Mr Poroshenko over the “non-agreed amendments”, which he said “breach the spirit and letter of the Minsk accords”.

Mr Pushilin said “the Minsk process is in fact interrupted” because Mr Poroshenko “does not respect the Donbas [Donetsk and Luhansk] people, he does not want peace”.

Mr Poroshenko’s bill says special status would have to follow local elections held in accordance with Ukrainian law and under international observation.

In addition, he says the elections would have to take place without any presence of armed groups and with open access for Ukrainian media.

The Kiev government, Western leaders and Nato say there is clear evidence that Russia has helped the rebels with troops and heavy weapons. Russia denies that, insisting that any Russians on the rebel side are “volunteers”.