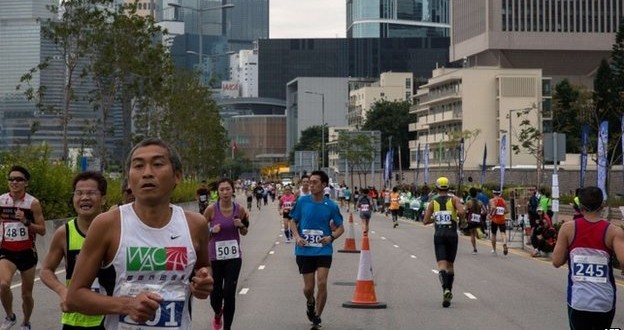 An estimated 300 people took part in the race

Hundreds of runners have competed in Hong Kong’s first inner-city ultramarathon, despite organisers describing it as “quite boring”.

Nestor Wong won the event in 3:24:20 and defended the course, saying it helped to hear the cheering crowds.

An ultramarathon is defined as any race above the standard marathon distance.

Ahead of the event, local runners criticised the course.

The eventual winner has defended the course, saying hearing the cheering crowds spurred him on

“It will be boring and very difficult, if not dizzy, for the runners who will have to do 25 laps of the same stretch of road,” Thomas Kiprotich told the South China Morning Post.

“I don’t mind monotonous courses, but this is a bit extreme monotony for my tastes,” Michelle Lowry added.

Kwan Kee, chairman of the Hong Kong Amateur Athletic Association and one of the race organisers, conceded that the course was “quite boring”.

But he told AFP spectator access would help: “It was great that we could secure this course in the heart of the city… land in Hong Kong is very limited.”