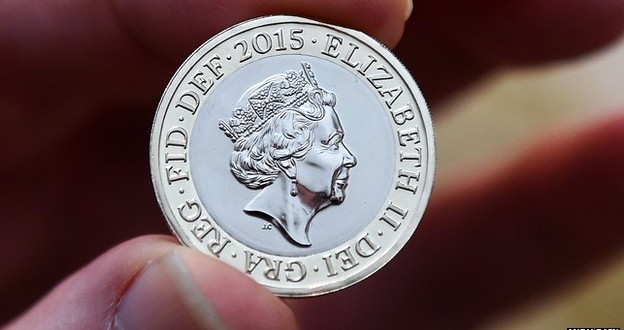 The Royal Mint has unveiled a new coinage portrait of the Queen.

Designed by Jody Clark, it shows a side profile of the Queen wearing a crown and drop earrings.

It is only the fifth definitive coin portrait to have been created during the Queen’s 63-year reign.

Coins featuring the new image will go into production from Monday but will only appear in circulation later this year.

Royal Mint engraver Jody Clark, who has just turned 34, said: “I hope that I’ve done Her Majesty justice and captured her as I intended, in a fitting representation.

“The news that my design had been chosen was quite overwhelming, and I still can’t quite believe that my royal portrait will be featured on millions of coins.”

Engraver Jody Clark was just 33 when his design was selected

Adam Lawrence, chief executive of the Royal Mint, said: “This change of royal portrait will make 2015 a vintage year for UK coins, and it will be hugely exciting for us all to see the new design appear on the coins we use every day.”

The competition was organised by the Royal Mint Advisory Committee (RMAC), which is part of the Treasury.

The winning art work was recommended to the Chancellor, and then the Queen, for final approval.