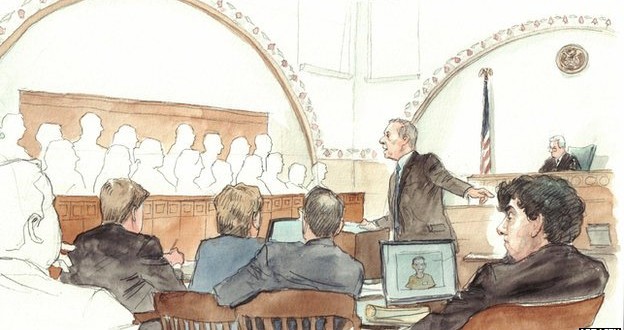 Boston bombing lawyer: 'It was him'

The trial of the man accused of bombing the Boston Marathon two years ago has begun, with his defence lawyer telling the jury he committed the crime.

“It was him,” the lawyer said as she prepared to defend Dzhokhar Tsarnaev’s actions by saying he had been influenced by his older brother.

Mr Tsarnaev, 21, could face the death penalty and is charged with more than 30 counts relating to the bombings.

Three people, including an eight-year-old boy, were killed after two pressure cooker bombs packed with nails, ball bearings and other shrapnel detonated in April 2013. More than 260 people were injured, with many losing limbs.

In 2013, Mr Tsarnaev pleaded not guilty to all charges, including one related to the killing of a police officer in the days after the bombing.

Early in the day, Mr Tsarnaev’s lawyer, Judy Clarke, stunned the court when she began her opening remarks by saying: “It was him.”

About two dozen victims attended the first day of the trial

The admission marks the beginning of the defence team’s strategy, which is to place blame for the bombings on the defendant’s older brother Tamerlan, who was killed by police.

“The evidence will not establish and we will not argue that Tamerlan put a gun to Dzhokhar’s head or that he forced him to join in the plan,” Ms Clark told the court, “but you will hear evidence about the kind of influence that his older brother had.”

Mr Tsarnaev was wearing a dark jacket, crumpled in the back, and had a goatee. His hair was thick and dark brown with flyaway strands.

He sat next to his lawyer, Judy Clarke, in the front row of the courtroom, as he listened to Assistant US Attorney William Weinreb describe what happened on the day of the bombings.

The story was harrowing, and Weinreb directed the jurors’ attention to a photo shown on computer screens in the room.

It showed a boy, Martin Richard, who was a third-grader when he was killed in the explosions. In the photo Richard was smiling and looking eager – as if he was ready to jump into a playground game.

Mr Tsarnaev stared straight ahead and didn’t seem to look at the pictures of the boy.

Spectre of execution in bombing case

She said that her team would not attempt to “sidestep” Mr Tsarnaev’s guilt in carrying out the “senseless, horribly misguided acts carried out by two brothers”.

Instead, she will argue that Tamerlan was the mastermind of the plot who coerced the younger sibling into being a submissive participant.

In turn, federal prosecutors laid out a case for Mr Tsarnaev’s culpability and began their push to convince the jury to vote in favour of executing him.

Speaking in explicit detail and presenting the jury with a grisly video, federal prosecutor William Weinreb portrayed Mr Tsarnaev as a cold-blooded killer that had “murder in his heart” and “believed that he was a soldier in a holy war against Americans”.

The jurors were shown a video of the moments after the first bomb exploded. It showed a huge blast of smoke, and several police officers running to the scene where people could be seen lying in pools of blood. The panel was visibly shaken by the graphic images.

Throughout the day, a handful of witness went before the jury. The defence only sparingly questioned their testimony.

As the lawyers presented their cases, about two dozen victims of the attacks, sitting as a group in the left side of the courtroom, looked on.

Among those in attendance were Denise and Bill Richard, whose eight-year-old son, Martin, died in the bombings.

As they watched from the rear of the room, the prosecutor told the jury that Ms Richard watched helplessly as “the bomb tore large chunks of flesh out of Martin Richard”.

Heather Abbott, who lost a leg in the attack, sat near the Richard family.

“While victims of the bombing lay in the hospital and learned that they would have to have their limbs chopped off to save their lives, the defendant pretended that nothing had happened,” Mr Weinreb said, noting that Mr Tsarnaev returned to socialise with his friends at the University of Massachusetts-Dartmouth following the attack.

A large manhunt was launched in the days following the bombing

As the day unfolded, Mr Tsarnaev, who appeared in court with shaggy hair and a goatee, slouched in his seat and showed little reaction.

The trial will be split into two parts. This first phase is to determine his guilt or innocence. If convicted, a second phase will determine the punishment, and the jury will have to decide whether he will be put to death.

The entire trial is expected to last three to four months.