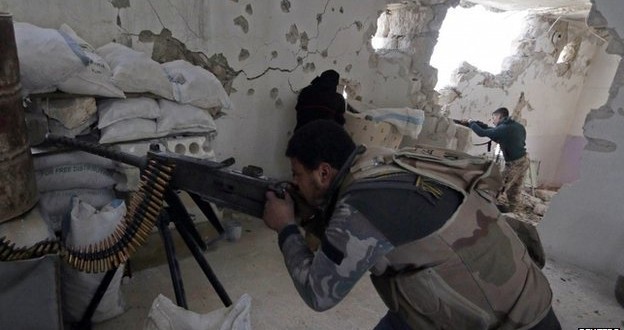 Dozens of Syrian security personnel and rebels have been killed in an attack on an intelligence facility in the city of Aleppo, a monitoring group says.

The attack began when a bomb placed in a tunnel near Air Force Intelligence’s headquarters was detonated, the Syrian Observatory for Human Rights reported.

Jihadist and Islamist rebels then launched an assault on the building.

Aleppo has been divided between rebel and government control since fighting erupted in the city in mid-2012.

But soldiers, backed by pro-government militiamen and fighters from Lebanon’s Hezbollah movement, have made steady advances since launching an offensive to retake rebel-held parts of the city last year.

Residents said the blast shook most of Aleppo, after rebels set off a large quantity of explosives in a tunnel running underneath or near the headquarters of the much-feared Air Force Intelligence in the western district of Jamiat al-Zahra on Wednesday afternoon.

Some people said it had felt like an earthquake, and the European-Mediterranean Seismological Centre (EMSC) reported a 2.3-magnitude tremor in the west of Aleppo at 17:31 local time (15:31 GMT).

There are conflicting accounts of whether the building itself was damaged or destroyed. Rebel sources told the Reuters news agency that part of the building had collapsed.

The BBC’s Jim Muir in Beirut says it has been a key target for the rebels ever since the battle for Syria’s second city began more than two years ago, and they have tried many times to capture it.

Much of Aleppo, Syria’s industrial and financial centre, has been devastated by two years of fighting

Immediately after the explosion, heavy fighting broke out, with fighters from the al-Qaeda-affiliated al-Nusra Front and hardline Islamist rebel groups bombarding the area and trying to advance.

Government forces responded with shellfire and called in air strikes.

There was no immediate information from state media, but a Syrian military source confirmed to the AFP news agency that there had been an explosion and clashes in the area.

Air Force Intelligence is seen by some as the elite agency of Syria’s intelligence empire.

The agency owes its power to the late President Hafez al-Assad, who was air force chief before coming to power in a coup.

It plays a leading role in operations against Islamist opposition groups, as well as covert actions abroad, and has a reputation for brutality.

The agency’s headquarters in Aleppo had been used as an interrogation and detention centre, activists said.

Our correspondent says that if the rebels could take the intelligence facility and hold it, it would be a major blow to the government’s grip on its main stronghold in the western side of the city, but it would be somewhat against the run of play in recent fighting there.

The flare-up comes as the UN special envoy to Syria, Staffan de Mistura, pursues his project for localised ceasefires, or “freeze zones” in Aleppo.