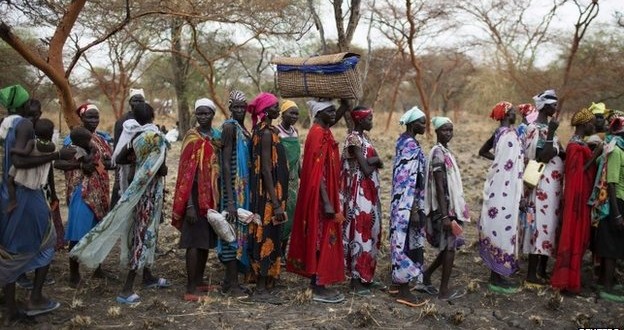 Mediators in peace talks between South Sudan’s government and rebels have said both sides’ failure to reach a deal is morally and politically “unacceptable”.

Their inaction, he said, would prolong suffering and a senseless war.

The 14-month conflict in South Sudan has displaced more than a million people and killed tens of thousands.

The government, led by President Salva Kiir, and the rebels, led by Riek Machar, missed Thursday’s deadline for reaching a deal in talks in Ethiopia, overseen by the East African regional body, Igad.

Mr Hailemariam, the Igad chairman, said he regretted that “the talks did not produce the necessary breakthrough”.

In an open letter addressed to the people of South Sudan, he attacked leaders on both sides for sticking to entrenched positions.

More than a million people have been displaced by the fighting

“The consequences of inaction are the continued suffering of you, the people of South Sudan, and the prolonging of a senseless war in your country. This is unacceptable, both morally and politically,” he said.

“Continuing a war flagrantly disregards the interests of you, the people. It is an abdication of the most sacred duty leaders have to you, their people: to deliver peace, prosperity and stability.”

The statement said mediators were hopeful that the “promise of peace will be fulfilled in the near future” – but did not say whether further talks were planned.

Mr Hailemariam’s statement also suggested that the peace process itself may need to be “reinvigorated and reformed”.

Igad, he said, would use “all influence” at its disposal “to convince those that remain intransigent” – an apparent reference to imposing sanctions on the leadership on both sides.

The UN last week announced the creation of a system that would allow sanctions to be imposed on those who obstruct the peace process – but did not mention anyone by name.

The UN has already imposed some limited sanctions and the US has warned both sides of further steps – including an arms embargo – if no deal is reached.

However, the government of South Sudan has warned that the imposition of any US-backed sanctions would be counter-productive and harm the peace process.

Attempts at maintaining a ceasefire have failed because of fighting that many argue has had ethnic overtones.

South Sudanese rebels have warned that the peace talks could collapse if the government refuses to give more ground, especially over the vexed question of power sharing in a unity government.

The war began when President Kiir accused Mr Machar – his former deputy – of planning a coup.

Mr Machar denied the coup allegation, but then raised a rebel force to fight government troops.

The fighting has mainly been between President Kiir’s Dinka ethnic group and the Nuer group, which Mr Machar belongs to.

Mr Kiir has led South Sudan, the world’s newest state, since its independence from Sudan in 2011.

Fighting erupted in the South Sudan capital, Juba, in December 2013. It followed a political power struggle between President Salva Kiir and his ex-deputy Riek Machar. The squabble has taken on an ethnic dimension as politicians’ political bases are often ethnic.