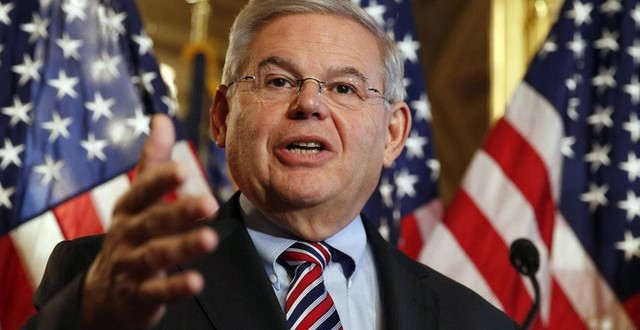 Sen Menendez has previously denied allegations of corruption and wrongdoing

The US justice department is preparing to bring criminal corruption charges against Democratic Senator Robert Menendez, US media reports say.

The politician from New Jersey is alleged to have used his office to promote the interests of a Democratic donor, in exchange for gifts.

Attorney General Eric Holder has reportedly given prosecutors permission to proceed with charges.

Sen Menendez has previously labelled the probe a smear campaign.

His spokeswoman said on Friday that all of his actions had been “appropriate and lawful”.

An official announcement from prosecutors is expected in the coming weeks.

Sen Menendez is one of the highest-ranking Hispanic members of Congress and a former chairman of the Senate’s foreign relations committee.

But the BBC’s Nada Tawfik says Sen Menendez is also one of President Barack Obama’s strongest opponents on lifting the embargo on Cuba and negotiating with Iran over its nuclear programme,

For the past two years, he has faced an investigation into his relationship with friend and donor Dr Salomon Melgen, following accusations he paid for underage prostitutes for the senator in the Dominican Republic.

Sen Menendez vehemently disputed the claims and the allegations were eventually withdrawn.

FBI officials continued to look into the ties between the two men and the scrutiny shifted to whether Sen Menendez had traded gifts for official duties.

According to CNN, the government’s case focuses in part on plane trips Sen Menendez took in 2010 to the Dominican Republic as a guest of Dr Melgen.

Prosecutors also are examining what role the senator played in helping Dr Melgen secure a deal to sell port screening equipment to the government of the Dominican Republic.