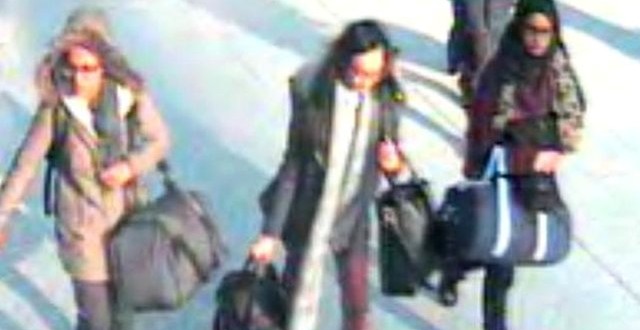 Families feel they have been “kept in the dark”, as Secunder Kermani reports

Relatives of three London schoolgirls believed to be in Syria have criticised police for not passing on “vital” information before they disappeared.

They say they might have been able to intervene if they had known one of the girls’ friends was already in Syria and police had spoken to the trio about it.

Shamima Begum and Amira Abase, both 15, and Kadiza Sultana, 16, were each given a letter for their parents, but hid it.

The Metropolitan Police said the girls had not been seen as a flight risk.

The Bethnal Green Academy pupils are thought to have joined Islamic State in Syria last month, having initially flown to Turkey from London on 17 February.’

Police spoke to Shamima, Amira and Kadiza after a close friend of theirs from the academy – a 15-year-old girl who has not been named – ran away to the region of Syria controlled by IS in December.

Officers spoke to them again at the beginning of last month and gave them letters to take home to their parents asking permission for counter-terrorism detectives to take handwritten statements about their friend’s lifestyle and beliefs.

The girls disappeared three weeks later, having never shown the letters to their parents.

Their families found them hidden in the girls’ bedrooms.

Relatives have criticised detectives for not going to them directly with they believe was vital information.

Kadiza’s cousin, Fahmida Aziz, said: “I think it’s absolutely crazy for an authority like a school or the police not to inform the parents.

“They kept us in the dark.”

Halima Khanon, Kadiza’s sister, added: “If we had known what was going on, we would have definitely looked into this… taken precautions with my sister.”

She added: “My sister was just a normal 16-year-old. There were no changes we noticed.”

Amira’s father Abase Hussen said he believed he could have stopped her from leaving Britain for Syria.

Mr Hussen said: “The message I want to send is ‘we love you, we miss you and [can’t] imagine life without you’.”

There was nothing to suggest at the time that the girls themselves were at risk and indeed their disappearance has come as a great surprise, not least to their own families”

BBC Newsnight understands that teachers at Bethnal Green Academy say they were not informed that the girl who went missing in December was feared to be with IS in Syria.

They say if they had been warned they could have looked out for warning signs in her friends, including the three who have disappeared.

The letter from Scotland Yard, first published by Vice News, was dated 2 February.

It was handed to the three girls three days later and said: “I understand your daughter may have known [the missing 15-year-old] as a friend.

“It is my role to understand [the missing girl] better and the reasons why she has decided to leave this country.

“I am trying to gather information which may help to find her and reunite her with her family.

“This will help the police and partner agencies to understand and prevent other vulnerable teenagers from disappearing. For these reasons I seek your permission to speak to your daughter.”

The letter made it clear that the three girls were not being investigated.

The Met said: “There was nothing to suggest at the time that the girls themselves were at risk and indeed their disappearance has come as a great surprise, not least to their own families.

“The girls were spoken to in December 2014 as part of the routine inquiry by officers investigating the disappearance of their friend.

“We continue to liaise with the school and local education authority in connection with this ongoing investigation.”

However, Scotland Yard added that, with hindsight, more could have been done to have given the letters directly to the girls’ families.