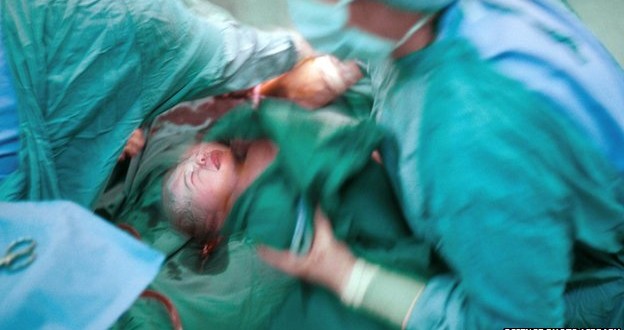 There are wide variations in Caesarean section rates across Europe, indicating a lack of consensus about the best way of delivering babies, a study suggests.

Around one in four births in the UK is by C-section, while in Cyprus the figure is 52% and in Sweden 17%.

The study of 26 European countries, published in the journal BJOG, said more research was needed to find out why the differences existed.

The Royal College of Midwives said health systems had a role to play.

The study, led by researchers at City University London said that Caesarean section rates in most EU countries have shown “a continuous rise”, although in a few countries there are signs they are flattening out.

It said there could be several possible explanations for this – “including a fear of litigation, financial incentives, women’s requests for Caesarean section and the perception that Caesarean section is a safe procedure”.

The study also said there were consequences to the rise, which included potential raised risks for mothers and babies – such as stillbirth – in future pregnancies.

Caesareans are more likely when babies are born to first-time mothers, when women have multiple births or when the woman in question has already had a Caesarean.

However, there is continuing debate, the study said, about the use of Caesarean section for babies who are breech (feet first), for multiple births and women who have had a C-section already.

In the study, the highest rate of Caesarean sections planned before labour started was in Cyprus at 38.8% and in Italy at 25%.

In the UK, planned Caesarean rates are 9% in England, 11% in Wales and Scotland and 14.6% in Northern Ireland.

Emergency C-section rates were highest in Romania at 33% and lowest in Sweden at 8.6%.

In all four countries of the UK, emergency rates are around 15%.

Prof Alison Macfarlane, professor of perinatal health at City University London, said: “Given that people are supposed to be practising according to evidence, it is surprising there are such wide variations between countries.

“We need a comparative review of national policies and guidelines and further research to ensure that clinical practice is based on evidence.”

She said it was important that the health of mothers and children was also prioritised.

Gail Johnson, professional advisor for education and research at the Royal College of Midwives, said the disparities were likely to be due to differences in health service models and the overall health of different populations.

She said the percentage of women giving birth by Caesarean in the UK was still “a bit too high”.

“A Caesarean is an emergency procedure, done when a normal birth isn’t going to work.

“It’s not a lifestyle choice, and although it’s a safe operation, it does carry more risks than a vaginal birth.”