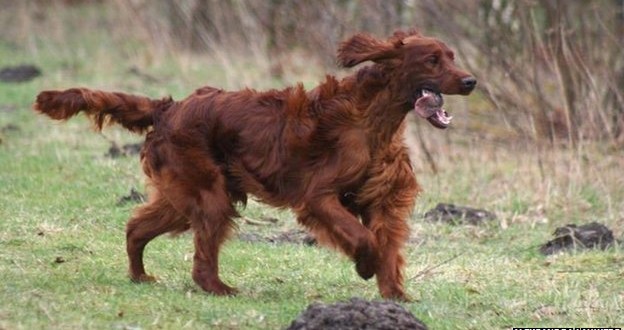 'No doubt' Crufts dog was poisoned

There is “no doubt” a prize-winning Irish Setter was “maliciously poisoned” at Crufts, one of his owners has said.

Co-owner Jeremy Bott said he did not think the dog was targeted, but the culprit may been acting on “a grudge against dogs or the Crufts show”.

Fellow owner Aleksandra Lauwers said they had lost “our love, family member and best friend to our son”.

Mr Bott’s wife, Dee Milligan-Bott, told BBC Radio 5 live: “I don’t believe in my heart of hearts that this was another competitor or anyone involved in the dog world.

“I can only imagine that it was a random act that somebody premeditated and wanted to cause total distress at the best dog show in the world.

“It’s not unknown for people to do things like this.

“He was a typical Irish Setter, totally trustworthy and so loved. We are devastated,” she said.

Jagger had just won second place in his category

“The Crufts committee and all championship show dog committees will have to look at security.”

Jagger came second in his class at the show at Birmingham’s NEC on Thursday.

He died after returning to Belgium with Ms Lauwers.

Leicester-based breeder, Mrs Milligan-Bott, claimed the dog must have been given the meat “while on his bench at Crufts”, calling it “a heinous crime.”

Speaking to BBC Radio 4, her husband Jeremy said: “When the vet opened up his stomach, she found cubes of meat – some sort of beef-like steak – and they had been sewn up with poison inside.

“She thinks there were possibly two or three types of poison.

“I think she identified one as a slug killer. I would guess that the other would turn out to be a rat poison or some industrial type of poison.”

He said he did not believe the attack was targeted but he did not think the culprit would be caught.

He said: “They will hopefully try with the CCTV they have in the halls at Crufts but I don’t think they will be able to find anybody.”

Jagger’s owner, Jeremy Bott, said the NEC would check its CCTV but he did not believe the culprit would be caught

The couple’s daughter, Amy Nettleton, said: “The accessibility of shows such as Crufts … is such that the general public can wander in and out of the dogs’ benches and approach any dog, so to keep an eye on everybody who came up and spoke to the dogs is very difficult.”

Ms Nettleton described her family as “just devastated and beside themselves”.

“The sensationalisation that the media has portrayed today – that Jagger was worth £50,000 – is beyond ridiculous,” she said.

“Jagger, to his family, was priceless and he was also used, not only as a family pet but as pet therapy.”

She said his owners took him into elderly care homes.

“He would sit there and give the residents some delight in him just being around.”

‘The biggest in the world’

Ms Lauwers wrote on her Facebook page: “To person who has done it, hope you can sleep well knowing you have killed our love, family member and best friend to our son.”

Her husband Willem said she was due to give a statement to police later.

The Kennel Club said it was awaiting a toxicology report from Belgian police.

“We have spoken to his owners and our heartfelt sympathies go out to them.

“We understand that the toxicology report is due and until that time, we cannot know the cause of this tragic incident. “

The Kennel Club, which organises Crufts, said it was “deeply saddened” to hear the news about Jagger

TV presenter Clare Balding, who had been hosting Channel 4’s coverage of the event, tweeted: “Everyone at #Crufts2015 horrified at death of Irish Setter Jagger post-mortem found poison. Awful for all concerned.”

“Obviously they have found a foreign substance in the dog’s stomach,” he said.

Human forensic techniques would probably be used to establish what the substance was, he said, as such testing went beyond what vets would normally deal with.

“Your heart goes out to the poor owner and what they must be going through,” he said.

West Midlands Police said officers had not received any complaint “at this stage” or been asked to investigate an allegation involving the death of a dog in Belgium.

A police spokeswoman said: “If, following toxicology results in Belgium, the force is formally asked to conduct inquiries into the circumstances surrounding the death of the animal, an investigation will take place by officers in conjunction with Crufts and the NEC.”

Did you go to Crufts? What is your reaction to the news? You can share your experiences by emailing [email protected].