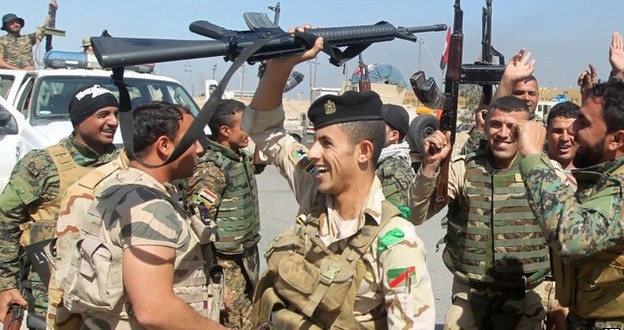 Iraqi forces have retaken some areas of the city of Tikrit from Islamic State (IS) militants, Iraqi officials say.

They say IS has rigged explosives across the city to stop the advance.

The government troops – backed by Shia militias – earlier claimed to have captured the town of al-Alam, on the northern perimeter of Tikrit.

The offensive in Tikrit – which has been under IS control since last summer – is so far the biggest government operation against the jihadists.

The militants still control large swathes of Syria and Iraq – including the country’s second-biggest city, Mosul.

The Iraqi officials said they managed to enter parts of Tikrit, the Sunni Arab hometown of former dictator Saddam Hussein, on Tuesday.

Unconfirmed reports said the militants blew up the only bridge on the Tigris River to try to halt the government offensive.

Earlier on Tuesday, al-Alam Mayor Laith al-Jubouri told Reuters that “the town is under the total control of security forces, the Hashid Shaabi (Popular Mobilisation) units and local tribal fighters”.

“We rejoice in this victory and we want al-Alam to be the launchpad for the liberation of Tikrit and Mosul,” he added.

There have been fears that the Shia-dominated forces could seek revenge on al-Alam’s predominantly Sunni residents for attacks carried out under IS militants.

But so far there have been no reports of any reprisals.

The operation to recapture Tikrit was launched more than a week ago.

But Iraqi officials admit that progress has been slow largely because of roadside bombs and sniper attacks by the jihadists.

Victory in Tikrit would be a major propaganda boost for the Iraqi government, the BBC’s Arab affairs editor Sebastian Usher says.

But the battle will also be a test of the government’s good faith and its ability to control Shia militias essential to the reinvigoration of the security forces, he adds.

The Peshmerga reportedly began advancing along the frontline south-west of the provincial capital Kirkuk.