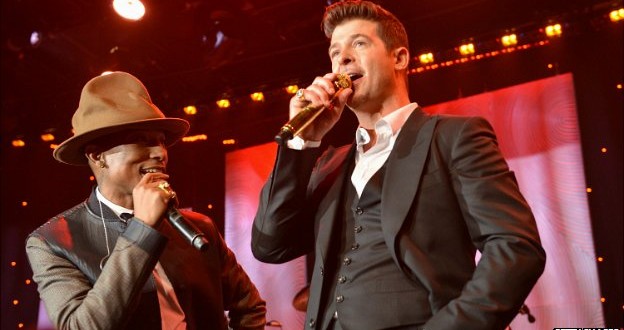 A jury in the United States has ruled that the writers of Blurred Lines – one of the best-selling singles of all time – copied a Marvin Gaye track.

Jurors in Los Angeles decided that the 2013 single by Pharrell Williams and Robin Thicke breached the copyright of Gaye’s 1977 hit Got To Give It Up.

Thicke and Williams denied copying the hit, and their lawyer said the ruling set a “horrible precedent”.

Gaye died in April 1984, leaving his children the copyright to his music.

His children – Nona, Frankie and Marvin Gaye III – sued Thicke and Williams in 2013. Nona wept as the verdict was read in court.

“Right now, I feel free,” she told reporters after the ruling. “Free from… Pharrell Williams and Robin Thicke’s chains and what they tried to keep on us and the lies that were told.”

One of Gaye’s daughter’s, Nona, said she felt “free” after the ruling

In court, Williams had told jurors that Gaye’s music was part of the soundtrack of his youth but he insisted it was not on his mind when he wrote the song.

But the musician recognised a likeness between the songs and agreed he was “channelling… that late-70s feeling” when he co-wrote the song.

Thicke testified that he had contributed little to the writing of the song.

“While we respect the judicial process, we are extremely disappointed in the ruling made today, which sets a horrible precedent for music and creativity going forward,” the pair’s lawyer Howard E King said.

“We are reviewing the decision, considering our options and you will hear more from us soon about this matter.”