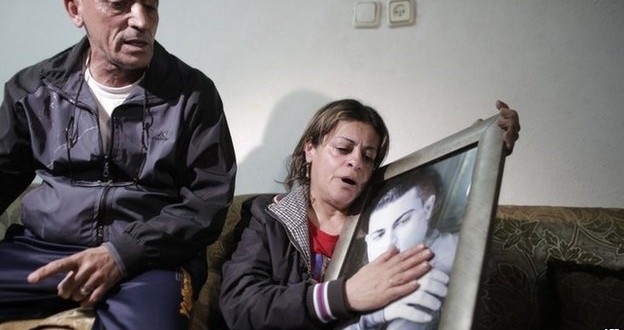 IS claims killing of 'Israeli spy'

Islamic State (IS) militants have posted a video online which appears to show a young boy shooting dead an Israeli Arab prisoner.

The man, identified as Mohammed Said Ismail Musallam, was accused by IS of working for Israel’s Mossad foreign intelligence service.

The 19-year-old left his home in East Jerusalem for Turkey last year, apparently intending to fight in Syria.

Israeli officials and Mr Musallam’s family denied he was an Israeli spy.

The video footage has not been independently verified and Israeli officials said they could not confirm its authenticity.

Mr Musallam’s family said he had left for Turkey four months ago without telling them. Soon after his departure, he told his brother that he planned to join IS in Syria.

A spokesman for the Shin Beth security service also told the AFP news agency that he had left home “on his own initiative”.

According to Mr Musallam’s father, Said, he had later contacted them online from Raqqa, the de facto capital of the “caliphate” proclaimed by IS last year, and told them he wanted to return home.

The family subsequently received a telephone call from a man who said Mr Musallam had been caught at a checkpoint on the Turkish border and put in an IS jail.

Mohammed Musallam sent his family a photo of himself dressed in military fatigues, holding a rifle

“They did not want to let him leave because if he comes back, he might be caught by the Israelis and tell them what he had seen. So they wanted to get rid of him,” Said Musallam was quoted as saying by the Israeli newspaper Yedioth Ahronoth. “I know my son. I am sure he’s not working for the Mossad.”

In February, the IS magazine Dabiq carried a long interview with Mr Musallam which contained what purported to be a confession that he had been sent by Israel to infiltrate the jihadist group.

The BBC’s Kevin Connolly in Jerusalem says the article was contained sketchy detail about his alleged training and mission, but its publication was a clear signal that he had fallen foul of the group and was in clear danger.

On Tuesday evening, Islamic State’s Furqan media outlet published a 13-minute video showing a young man, identified as Mr Musallam, sitting in a room wearing an orange jumpsuit, talking about how he was recruited and trained by Israeli intelligence.

He is later shown kneeling in an empty field, facing the camera. Behind him stand two figures in camouflage fatigues, one of whom appears to be a boy.

The boy appears to shoot the kneeling figure in the head with a handgun and then to fire further shots into the body.

The video then carries a warning from an older, French-speaking militant aimed at the Jewish people.

French media and IS supporters identified the older militant as Sabri Essid. He is reportedly a relative of Mohamed Merah, who killed three unarmed French soldiers, a rabbi and three small children at a Jewish school in south-western France in 2012.