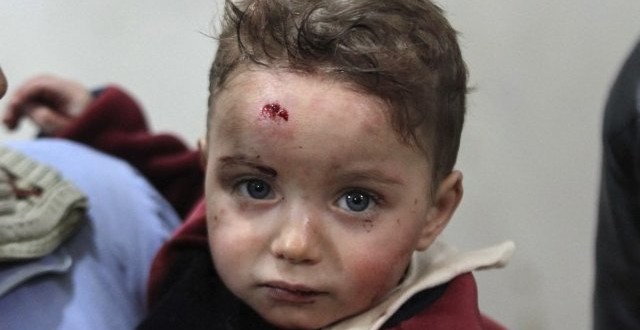 The war in Syria is difficult to solve because of its complexity, as Jeremy Bowen reports

The United Nations and a global coalition of aid agencies have accused international powers of failing the victims of the Syrian conflict.

Stephane Dujarric, a spokesman for the UN chief, told the BBC powerful nations had put their own interests ahead of the need to end the war.

He was responding to a joint report from humanitarian agencies, which criticised the UN Security Council.

It said civilians had experienced their “worst year” since the conflict began.

Mr Dujarric told the BBC the UN still believed in bringing about a political solution to the conflict and called on the international community to unite.

He said there had been real success in eliminating President Bashar al-Assad’s chemical weapons and getting some humanitarian aid through, but the supply of weapons to the warring parties was just making things worse.

“We have found a lack of political will to move forward in a united fashion to stop the fighting,” Mr Dujarric said.

The Failing Syria report by agencies, including Save the Children and Oxfam, said the 15 member Security Council had not fulfilled pledges to increase aid access and alleviate suffering.

“The bitter reality is that the Security Council has failed to implement its resolutions,” said Jan Egeland, secretary general of the Norwegian Refugee Council, another of the groups involved in the report.

“Parties to the conflict have acted with impunity and ignored the Security Council’s demands, civilians are not protected and their access to relief has not improved,” he added.

Three Security Council resolutions passed last year called for an end to attacks on civilians, an increase in aid, and allowed the UN to operate in Syria without permission from Damascus, among other things.

Separate analysis by another group of charities says 83% of Syria’s lights visible from space have gone out.

WithSyria, a coalition of more than 100 humanitarian and human rights organisations, released satellite imagery showing that the number of lights had fallen dramatically since March 2011.

Lights visible over Syria at night in March 2011

Lights visible over Syria at night in February 2015

The organisations said they believed such a dramatic drop was because of a number of factors, including infrastructural damage.

Separately, a UN-backed report by the Syrian Centre for Policy Research said four years of armed conflict, economic disintegration and social fragmentation in Syria have forced some 10 million people to flee their homes and reduced life expectancy by two decades.

The Failing Syria report, from leading human rights and humanitarian groups, is scathing.

Last year was the most bloody of the war so far, and the worst for civilians. It condemns the world’s most powerful countries for not having the will to apply their own UN resolutions on the free flow of humanitarian aid to the victims of the war.

Britain’s former Foreign Secretary David Miliband, now head of the International Rescue Committee, said it was shocking that politicians around the world had given up on solving the Syrian crisis.

The UN and other agencies have established a massive programme of aid. But donations from governments are being cut as the war drags on – at a time when needs are increasing.

The war is hard to stop because of its complexity. Foreign intervention of all kinds has deepened the fighting. And what makes it all so much more cruel is that the end is nowhere in sight.

In its report, MSF said from the estimated 2,500 doctors who worked in Aleppo, Syria’s second biggest city, before the conflict, fewer than 100 now remain.

The rest have fled, become internally displaced or have been kidnapped or killed.

It said this has left a “catastrophic gap in expertise and experience in medical care”.

The unrest in Syria began in 2011 with nationwide protests against President Bashar al-Assad.

His security forces attempted to use force to crush the dissent, with the opposition taking up arms to fight back.