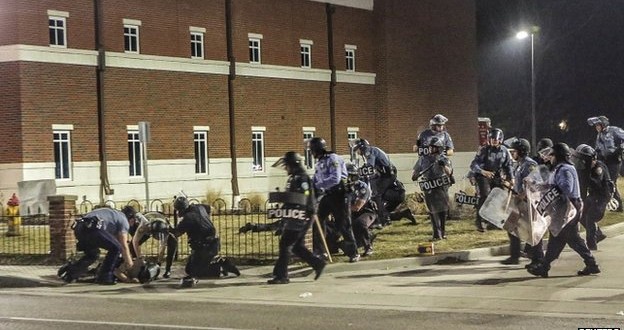 Police rush to a fellow officer hit by gunfire

The shooting of two police officers in Ferguson, Missouri, was a “heinous assault” that could undermine police reforms, said the US attorney general.

Two officers were seriously injured early during protests following the resignation of the police chief after a damning report about racial bias.

The fatal shooting of a black teenager last year in Ferguson sparked protests about the police use of lethal force.

Shots were fired on early Thursday morning from about 125yds (114m) away as a demonstration was breaking up in the St Louis suburb of Ferguson following the resignation of the city’s police chief, Tom Jackson.

One officer was shot in the face and one in the shoulder, but both were released from hospital on Thursday.

Police have taken two men and one woman into custody for questioning, but no arrests have been made.

Describing the “heinous assault”, Mr Holder added: “Such senseless acts of violence threaten the very reforms that non-violent protesters in Ferguson and around the country have been working towards for the past several months.”

President Barack Obama tweeted “violence against police is unacceptable” adding “Path to justice is one all of us must travel together”.

Several witnesses said the shots had come from a hill on the other side of the street from the crowd of protesters.

“We were very close to having what happened in New York last year,” Mr Belmar said in a press conference on Thursday, referring to two police officers shot and killed while on duty.

He added it was a “miracle” there were no injuries or deaths given the amount of gunfire he heard in protests last summer and autumn.

The St Louis County police chief said after hearing the gunshots many officers had drawn their weapons but no-one had fired.

The shootings occurred during protests after the announcement that Mr Jackson would resign.

He quit one week after a report alleging widespread racial bias in his department and the city’s court system.

of people arrested are African Americans, whereas only:

of Ferguson population is black

Mr Jackson was the sixth Ferguson official to be fired or step down. He had initially resisted calls from protesters and some state leaders to resign.

He was widely criticised after the shooting of 18-year-old Michael Brown in August and the weeks of demonstrations that followed.

Brown’s killing was one of several recent cases around the US in which the deaths of black men at the hands of the police have triggered protests.

On Thursday, his family said in a statement they rejected “any kind of violence directed toward members of law enforcement”.

“We specifically denounce the actions of stand-alone agitators who unsuccessfully attempt to derail the otherwise peaceful and non-violent movement that has emerged throughout this nation to confront police brutality,” they said through their lawyer Ben Crump.

Eyewitness Keith Rose: “I saw one officer covered in blood”