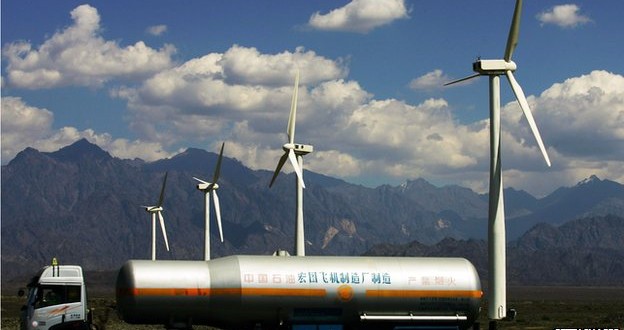 China is now by far the world’s biggest investor in renewable energy, far outstripping the US

The growth in global carbon emissions stalled last year, according to data from the International Energy Agency.

It marks the first time in 40 years that annual CO2 emissions growth has remained stable, in the absence of a major economic crisis, the agency said.

Annual global emissions remained at 32 gigatonnes in 2014, unchanged from the previous year.

But the IEA warned that while the results were “encouraging”, this was “no time for complacency”.

“This is both a very welcome surprise and a significant one,” said IEA Chief Economist Fatih Birol.

An important factor could be that China’s coal consumption fell in 2014, driven by their efforts to fight pollution, use energy more efficiently and deploy renewables”

“It provides much-needed momentum to negotiators preparing to forge a global climate deal in Paris in December: for the first time, greenhouse gas emissions are decoupling from economic growth.”

And IEA Executive Director Maria van der Hoeven said while the data was “encouraging”, this was “no time for complacency” and “certainly not the time to use this positive news as an excuse to stall further action”.

Analysts attribute the slowdown in emissions to changing patterns of energy consumption in China and OECD countries.

Prof Corinne Le Quere, of the Tyndall Centre for Climate Change Research at the University of East Anglia, said: “An important factor could be that China’s coal consumption fell in 2014, driven by their efforts to fight pollution, use energy more efficiently and deploy renewables.

“Efforts to reduce emissions elsewhere will have played a role, but there are also more random factors such as the weather and the relative price of oil, coal and gas.”

The IEA said changing patterns of energy use in China and in OECD countries, including the shift towards more renewable energy, was having the desired effect of decoupling economic growth from greenhouse emissions.

The Paris-based organisation said that in the 40 years it had been collecting data on carbon dioxide emissions, annual emissions had stalled or fallen only three other times, which were all associated with global downturns:

Greenhouse gas emissions may finally be decoupling from economic growth

Full details of the IEA report will be released in June, ahead of UN negotiations to sign a new international climate change agreement at talks in Paris in December.

Countries are aiming to reach agreement on a deal that will come into force from 2020.

The aim is to limit the increase of the average global surface temperature to no more than 2C (3.6F) compared with pre-industrial levels, to avoid “dangerous” climate change.

Energy and Climate Change Secretary Ed Davey said the figures showed that green growth is achievable not just for Britain but for the world.

He added: “However we cannot be complacent – we need to dramatically cut emissions, not just stop their growth.

“Getting a new global climate deal is absolutely vital, and the year ahead is going to be of critical importance. “