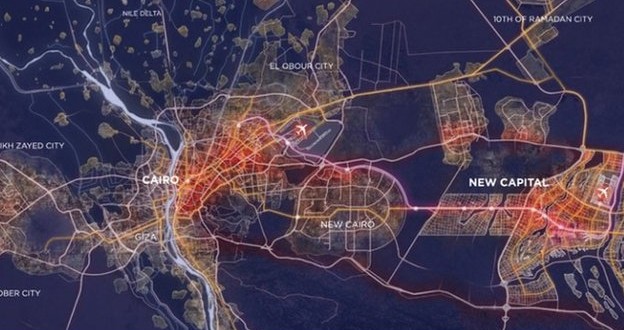 Egypt’s new administrative and business city, on the outskirts of Cairo, has been revealed on a new website.

It says the city will house up to five million residents and be built in the corridor between Cairo and the Red Sea.

There will be 1.1m housing units and 1.75m permanent jobs.

The city is set to be officially unveiled at an Egyptian government conference at the Red Sea resort of Sharm El-Sheikh, to global investors and politicians.

The website – unveiled on Friday – says that “the masterplan is to create a global city with smart infrastructure for Egypt’s future, which will provide a multitude of economic opportunities and offer a distinct quality of life”.

The website says the city’s site “is situated along the corridor between Cairo and the Red Sea, providing linkages to significant shipping routes. The city is bound to become a focal point of the Eastern Cairo region”.

Cairo is a crowded city

Egyptian government departments, ministries, and foreign embassies, will move to the new metropolis from out of Cairo, whose urban area is home to 18 million people.

The US Secretary of State, John Kerry, has praised recent economic reforms in Egypt, and urged businesses to invest in the country.

Mr Kerry was attending an international economic conference to discuss ways to revive the Egyptian economy.

Hundreds of businessmen and dignitaries from around the globe were at the meeting in Sharm El-Sheikh.

Dozens of major infrastructure projects have been unveiled, attracting billions of dollars’ worth of outside investment. Saudi Arabia, Kuwait and the United Arab Emirates have each pledged $4bn of investments in Egypt,

It comes after years of political upheaval and severe, ongoing, tensions.