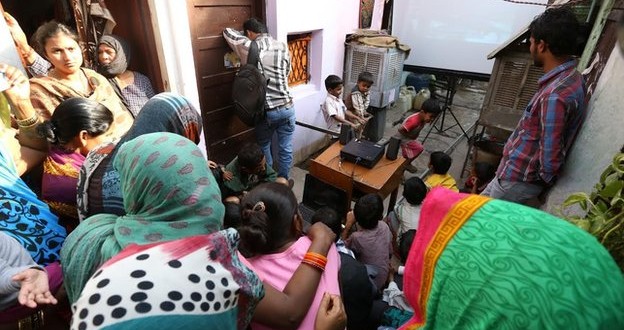 Indian police have opened in inquiry into an activist who showed a banned BBC film on the 2012 Delhi gang rape in the slum where the rapists lived.

Ketan Dixit projected the film, India’s Daughter, on to sheets in front of 50 people in Ravidas Camp.

It is the second time in recent days Mr Dixit has publicly screened the film.

Police obtained an injunction on the documentary, which features an interview with one of the rapists, over claims it could inflame tensions.

Rapist Mukesh Singh, who along with three others is facing the death penalty for the crime, expressed no remorse in the interview, and blamed the victim for fighting back.

The film-makers have dismissed the concerns.

Appeals against the ban are due to be heard next Wednesday.

‘For our own good’

Mr Dixit told BBC Hindi that he wanted to “show such films in rural areas as only popular Bollywood films reach people living there”.

“This film is important. Poor people already know about this rape case and they are interested in it. They should get to know the mindset of the rapist in this case.”

Delhi police official Rajan Bhagat said “any screening of the film of the film is illegal”, and the police had initiated an investigation into the incident.

Reports say more than 50 residents of the Ravidas Camp slum watched the film, which was shown using a projector linked to a laptop.

“We thought the screening of the film might disturb the camp,” an unnamed resident told the Indian Express newspaper.

“Later, we were convinced that it was for our own good and that even our children should watch the film.”

However, some people left half-way through, complaining that the film was in English and they could not understand it.