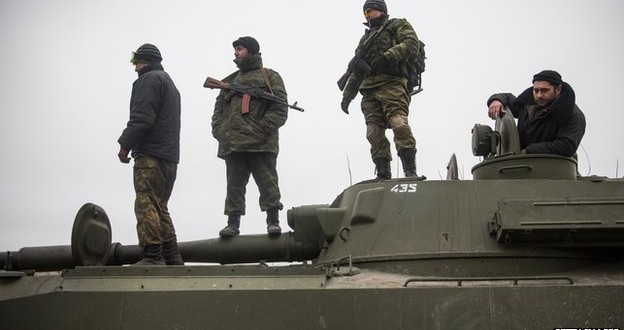 Russia has denied actively helping the rebels in eastern Ukraine

A report on Russia’s role in the Ukraine conflict – compiled by the murdered Russian opposition politician, Boris Nemtsov – will be released in April, his colleague has told the BBC.

Ilya Yashin said most of the material gathered by Mr Nemtsov had been retrieved, despite police searches of his apartment and offices.

Mr Nemtsov was shot dead on 27 February while walking near the Kremlin.

His allies have said the killing was linked to his criticism of the Kremlin.

Several men from the Caucasus region have been arrested for the murder, prompting suggestions of an Islamist link to the attack.

One of the men charged over the murder has said he was forced into a confession.

Mr Yashin told the BBC that a team of experts had been assembled to complete Mr Nemtsov’s report.

He said the team had recovered most of the material gathered by the politician, and was expected to make further reporting trips to complete the work he had planned.

Mr Yashin did not provide any further details about the report.

Mr Nemtsov’s computer and documents are said to have been seized by the authorities after his death.

The BBC’s Richard Galpin in Moscow says the report is likely to examine the extent of Russian casualties in Ukraine – an extremely sensitive issue.

Several journalists who have investigated the casualties have been attacked.

One of the suspects in the Nemtsov murder, Zaur Dadayev, says he was tortured in custody

Ukraine’s military has been battling pro-Russian separatist rebels in the country’s east.

The Ukrainian government, Western leaders and Nato say there is clear evidence that Russia is helping the rebels with heavy weapons and soldiers.

Independent experts echo that accusation. Moscow denies it, insisting that any Russians serving with the rebels are “volunteers”.

Mr Nemtsov was killed days before a march he had been organising against the conflict in Ukraine.

Last year, he contacted the Russian authorities after receiving death threats on his Facebook page, which he linked to his position on the conflict in Ukraine.

Mr Nemtsov’s supporters have questioned suggestions of an Islamist link to his killing, arguing that he was not a prominent critic of radical Islam and focused most of his criticism on President Vladimir Putin.

President Putin has condemned the murder and vowed to find the killers.