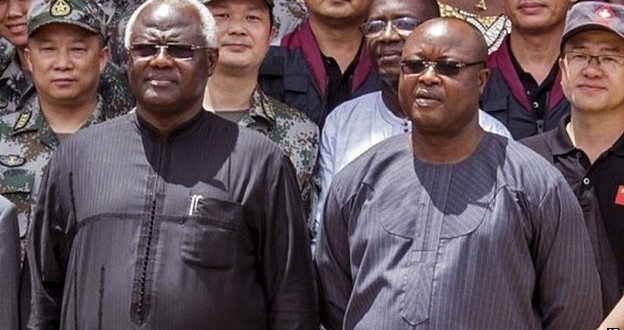 Sierra Leone’s Vice-President Samuel Sam-Sumana has gone into hiding while he seeks political asylum at the US embassy in the capital, Freetown.

Mr Sam-Sumana told the BBC he and his wife fled their home after “a tip-off” that soldiers were surrounding it.

The move comes a week after his expulsion from the ruling party.

Two weeks ago, Mr Sam-Sumana said he was putting himself in quarantine for 21 days after one of his bodyguards died of the Ebola virus.

Police and army sources confirmed to the BBC’s Umaru Fofana in Freetown that troops were sent to the vice-president’s residence on Saturday morning.

They said the troops were dispatched to withdraw Mr Sam-Sumana’s security detail, but would not say whose orders they were acting on.

However, Information Minister Alpha Kanu told the BBC that the soldiers merely went to Mr Sam-Sumana’s house to “strengthen the quarantine”.

“I don’t feel safe this morning as vice-president,” Mr Sam-Sumana told the AP news agency by phone. He said he had spoken to US Ambassador John Hoover and was waiting for a response.

US embassy spokeswoman Hollyn Green said embassy officials, including Mr Hoover, had “seen the news” but could not provide any reaction.

“There is no comment at the moment and there is no action on our part,” Ms Green told AP.

Government spokesman Abdulai Bayraytay told the BBC that Mr Sam-Sumana had no reason to seek asylum, saying his safety was “guaranteed”.

Mr Sam-Sumana was expelled from the ruling All People’s Congress Party (APC) last week on allegations of “orchestrating political violence” and trying to form a new party in his home district of Kono.

He was also accused of falsifying academic credentials. He denied the allegations – calling them “baseless fabrications and lies” – and rejected calls for his resignation.

Under Sierra Leone’s constitution he cannot be sacked, but he could be removed through a parliamentary impeachment.

Relations between Mr Sam-Sumana and President Ernest Bai Koroma have long been frosty, our correspondent reports.

Mr Sam-Sumana, 53, has been vice-president since 2007, when he first stood as Mr Koroma’s running mate. President Koroma is now serving his second and final term.

According to a biography on the presidential website, Mr Sam-Sumana has spent time studying and working in the US, and is an expert in diamond mining.

He said two weeks ago that he had chosen to be quarantined to “lead by example” in the battle against Ebola.

More than 3,500 people have died from Ebola in Sierra Leone, which along with Guinea and Liberia has seen the vast majority of deaths from the disease.