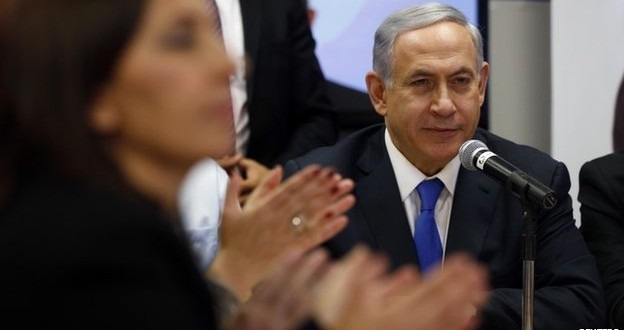 The Israeli Prime Minister, Benjamin Netanyahu, has said he will not allow the creation of a Palestinian state if he is re-elected in Tuesday’s vote.

He was attempting to shore up support with polls putting his Likud party just behind the centre-left opposition alliance, the Zionist Union.

The centre-left alliance has promised to repair ties with the Palestinians and the international community.

Neither side is expected to win more than a quarter of the votes.

Mr Netanyahu said that ceding lands to the Palestinians would risk leaving Israel open to attacks by Islamists.

When asked if that meant a Palestinian state would not be established if he is elected, Netanyahu replied “indeed”.

As incumbent prime minister it was Benjamin Netanyahu’s decision to call these early elections with the aim of swapping a fractious right-wing coalition government for one which might be easier to manage.

There may still be enough like-minded parties in the next parliament to allow him to form a coalition but that is far from certain.

Early in the 90-day campaign his supporters worried he cut a complacent figure, declining a television debate with his rivals and stressing his national security credentials.

In recent days however he has shown a burst of energy but his rivals hope that is an indication of the anxiety his party managers are feeling.

The Zionist Union party, led by Yitzhak Herzog, has been tipped to win most seats

In 2009 he backed the idea of a Palestinian state, on condition that it was demilitarised and that the Palestinians recognised Israel.

Correspondents say the election is likely to be followed by a lengthy period of negotiations over the formation of the next coalition government.

Also on Monday, Mr Netanyahu spoke at a settlement in East Jerusalem and said he was the only person who could ensure the city’s security.

Several other parties are campaigning, such as the ultra-Orthodox Shas party

Moshe Kahlon, the head of the new centrist party, Kulanu, could play kingmaker

The Zionist Union party co-leader Yitzhak Herzog, visiting the Western Wall on Sunday, one of the holiest sites in Judaism, pledged to “safeguard Jerusalem and its residents in actions, not just words, more than any other leader”.

It has been announced that Mr Herzog’s co-leader, Tzipi Livni, has given up an agreement to rotate the post of prime minister with him should they win power.

Indications are that whichever party performs best, they could need the support of new centrist party Kulanu in order to build a coalition, though its leader, Moshe Kahlon, has not yet said who he will back.