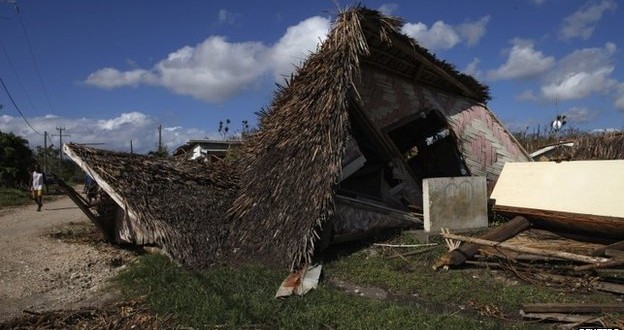 Getting aid to the islands has proven difficult because of a lack of landing strips or deepwater ports.

Eleven people have died, the UN said, revising down an earlier toll of 24.

Tanna island has a population of about 30,000 people and is about 200 kilometres south of the capital Port Vila. It was directly in the path of the cyclone.

Tom Perry from Care Australia said relief workers in Tanna reported the hospital was functioning but had no roof.

“The impression they got from their initial observations was that the damage is significantly worse than Port Vila,” Mr Perry told AFP news agency.

Jon Donnison: “The full impact may not be known for several days’

“We understand that the reconnaissance imagery shows widespread devastation,” Ms Bishop said of Tanna. “Not only buildings flattened – palm plantations, trees. It’s quite a devastating sight.”

Communication to many of the other 80 islands in the archipelago are still down and officials have warned survivors could quickly run out of food.

The struggle to reach Vanuatu’s islands

Aurelia Balpe, head of the International Federation of Red Cross and Red Crescent Societies (IFRC) for the Pacific, says the Vanuatu government is co-ordinating assessment and aid, including flights to other islands.

Aid agencies have organised themselves in clusters to better co-ordinate help, but getting to islands is not easy.

“There are difficulties in understanding how large a plane can land on some islands. In many of these small islands, they don’t have ports that can handle large vessels. In some places we may need to construct landing places for planes and boats,” she said.

Many smaller boats in Port Vila were damaged by the storm, and the distance is a challenge. “It’s about 150km from Port Vila to the island of Erromango – which would take at least four hours in a small boat – and another 80km from Erromango to Tanna.”

Poor weather and rough seas are also an issue. “The first couple of days were very difficult because of the cyclone, and even now there are really bad swells and storm surges,” Ms Balpe said.

The category five storm hit Vanuatu on Saturday, bringing wind gusts of up to 300km/h (185mph).

Across the Pacific nation, many people have lost their homes or face extensive rebuilding. Telecommunications, power and water supplies have all been badly affected.

“We urgently need water purification tablets to make sure that the water is safe to drink,” Alice Clements of Unicef told the BBC.

“We urgently need food for communities whose crops have been absolutely destroyed and will take up to three months to grow. We absolutely need shelter.”

“We are relying on the fact that the food crops and the gardens are still edible and they can be used for the first week but after [that] we’ll need to get some rations on the ground,” he told Australian media.

As well as crops, residents’ stockpiles of food had been destroyed and wood was too wet for people to cook with, reports said.

Communications are still down in many of Vanuatu’s islands

In Port Vila a clean-up is under way but the destruction was extensive. Power and water have been restored in some areas but up to 90% of homes have been damaged.

The hospital is coping with an influx of injured people but a surgeon said beds had been moved outside because of structural damage.

On the main island and in the provinces of Torba and Penama to the north, some 3,300 people were in evacuation shelters, the UN Office for the Coordination of Humanitarian Affairs said.

The president, returning from a conference in Japan, has described the storm as a “monster” that wiped out years of development.

He has linked the disaster to climate change, citing changing weather patterns, rising seas and heavier-than-average rain in Vanuatu.

Australia announced on Tuesday that it was sending more personnel, including a search and rescue team, and three more military planes carrying aid.

How poor is Vanuatu?