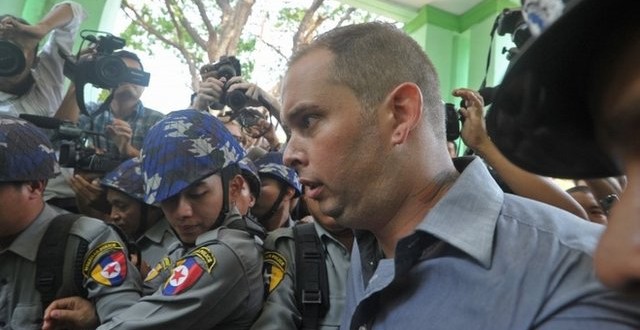 A New Zealander and two Burmese men have been found guilty of insulting religion in Myanmar over a poster promoting a drinks event depicting Buddha with headphones.

Philip Blackwood, who managed the VGastro Bar in Yangon, was arrested in December along with bar owner Tun Thurein and colleague Htut Ko Ko Lwin.

They have each been sentenced to two and a half years in jail.

Burmese law makes it illegal to insult or damage any religion.

The poster, which was posted on Facebook and showed Buddha surrounded by psychedelic colours, sparked an angry response online.

All three men had denied insulting religion during their trial. Tun Thurein had also told the court that Blackwood alone was responsible for the posting. Blackwood had said sorry online and repeated his apology in court.

But the judge, Ye Lwin, said that though Blackwood apologised, he had “intentionally plotted to insult religious belief” when he uploaded the poster on Facebook, reported AFP news agency.

Blackwood said he planned to appeal against the sentence.

He told the BBC’s Jonah Fisher in Yangon after the verdict that he was “pretty disappointed” with the outcome.

Human Rights Watch Deputy Asia Director Phil Robertson told AP that the three men acted in a culturally insensitive way but should not have been sent to prison.

“What this shows is freedom of expression is under greater threat than ever in Burma (Myanmar) just as the country heads into a pivotal election year,” he said.

Buddhist nationalism has been on the rise in recent years, with extremist monks such as Wirathu growing in popularity and clashes targeting Muslim minorities, particularly in Rakhine state.