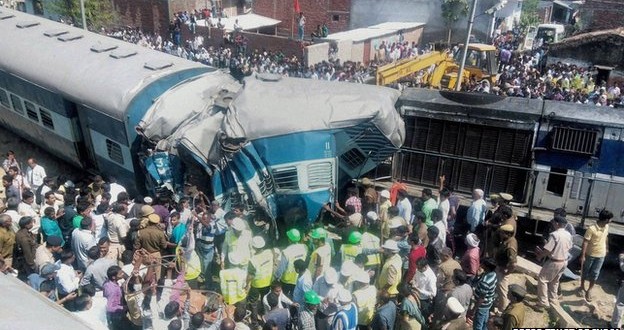 Villagers, police and railway guards were trying to rescue passengers trapped in the coaches

A passenger train has derailed in the northern Indian state of Uttar Pradesh, killing at least 34 people, a railway spokesman told the BBC.

The engine and two carriages of the Janta Express, which travels between Dehradun and Varanasi, went off the rails near Bachhrawan village.

Several dozen people were injured in the accident, officials said.

Villagers, police and railway guards are trying to rescue passengers trapped in the carriages.

Images from the scene show mangled carriages lying beside the track.

The state’s junior railway minister Manoj Sinha said an inquiry has been ordered to find out what caused the accident.

Dozens of people were injured in the accident on Friday

One of the coaches was completely crushed

But there have been numerous train accidents in India in recent years, killing hundreds of people.

Last month, at least 11 people died after three coaches of the Bangalore-Ernakulam Intercity Express derailed in the southern state of Karnataka.

A BBC correspondent in Delhi says the state-run railway network has a patchy safety record – there has been little investment in upgrading decaying tracks and signals and the country lags behind on anti-collision technologies.

Decades of neglect, low investment and subsidised fares have left the network in a shambles, our correspondent adds.

In the railway budget announced last month, the Indian government unveiled plans to invest $137bn (£88bn) in the ageing railway network over the next five years to help modernise it.