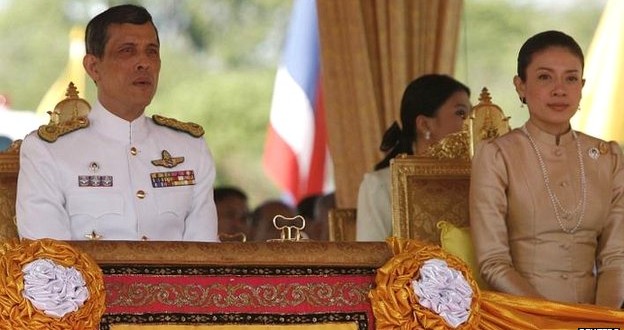 Crown Prince Vajiralongkorn and then Princess Srirasmi in 2008

Three brothers of former Thai princess Srirasmi Suwadee are the latest members of her family to be imprisoned for defaming the monarchy.

Natthapol, Narong and Sitthisak Suwadee were jailed for five-and-a-half years. Their parents were sentenced on similar charges last week.

At least seven relatives of the former princess have been arrested and accused of corruption and lese majeste since her downfall.

Her uncle, a former police general, has been accused of amassing vast wealth through smuggling and gambling rackets.

Srirasmi, the prince’s third wife, married him in 2001 and they have one son.

Critics of the country’s lese majeste law say it restricts free speech and is used to silence political opposition.