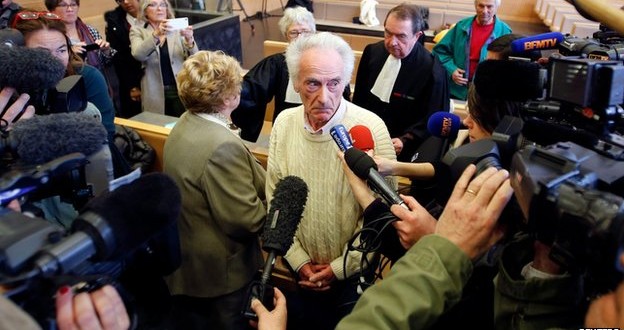 Le Guennec claimed Picasso’s wife had given him the artworks

An elderly electrician has been ordered to return more than 200 Pablo Picasso works after a court found him guilty of possessing stolen goods.

Pierre Le Guennec, 75, and his wife Danielle were also given a two-year suspended sentence after hiding the pieces at his home in Grasse, France, for close to 40 years.

He claimed Picasso had given him the treasure trove before he died in 1973.

The works will now be returned to the Picasso Administration.

The cache apparently includes lithographs, portraits, a watercolour and sketches that were created between 1900 and 1932.

“Picasso had total confidence in me,” Le Guennec said during his trial. “Maybe it was my discretion.”

He said that Picasso’s wife Jacqueline had given him a box with 271 works inside, saying “This is for you.”

The artworks remained in his garage until 2010, when he took them to Paris to have them authenticated.

It was at this point the artist’s heirs filed a complaint against him.

Prosecutors had called for the couple to receive a five-year suspended jail sentence.